I was lucky enough recently to get a lightly used Wenger Spotlight from another SOSAK member (Thanks SwissMan) and I thought I would share my thoughts on it.  While it isn’t the brightest flashlight out there (not even close!) It is a pretty neat little knife in it’s own right!

Of course it’s not really all that little.  Based on Wenger’s standard 85mm frame, the Spotlight features the typical main blade, nail file, can opener, locking bottle opener with integrated screwdriver, serrated, self sharpening scissors and the familiar corkscrew and reamer on the backside.  The SpotLight also features the typical Wenger toothpick, tweezers and keychain.  Anyone who has been reading my ramblings here and on the forum for a while knows that I am a big fan of the scissors, so I think this is a pretty handy model- similar configuration to Wenger’s Traveler model or the Victorinox Climber.

The big difference is of course this black plastic lump running the length of the knife, between the scissor and can/bottle opener layers.  It is actually pretty low key as far as large unsightly bumps go, and while it does claim more real estate than the LED lights on Victorinox models like the CyberTool Lite or Spartan Lite, it does benefit from having a switch that is much more flush than the Vic’s, meaning it is less likely to be accidentally turned on.

This is good of course, because the SpotLight has an incandescent bulb, which any flashlight enthusiast knows will kill batteries faster than their LED counterparts.  They also do not produce the same amount of light as a similar size/power LED light, so the Spotlight is really only for emergency or backup use.

The other good news is that the light is powered by a single AAA battery, easily obtainable almost anywhere, while the Victorinox Lite models are powered by two 3V lithium watch cells, which certainly do last longer, but aren’t as easy to replace due to cost and availability.  I know this because my area was hit with a class three hurricane a few years ago, and all I could find were C, D, AA, AAA and 9V batteries at the few stores that were open in the aftermath.

Besides, while it may not have the performance of a modern day LED, folks managed to get by in the dark for many years with incandescent lights, and this one reminds me very much of a trusty Mag Solitaire that came in handy more times than I can count.  A newer model might be a nicer gift, but for anyone nostalgic for the good old days, or just wants a reliable light they can always find cheap batteries for, the SpotLight just might be the one!  I know I’m glad I’ve got mine! 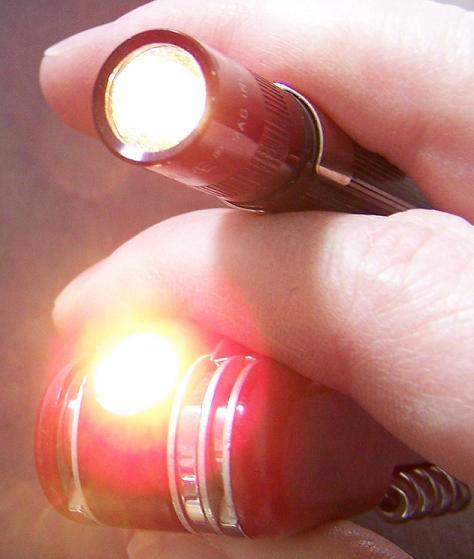