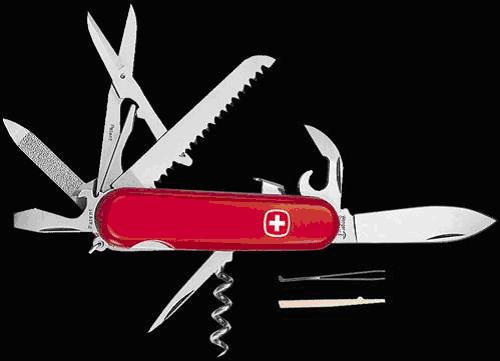 I chose the model that had the same tools as the Victorinox Huntsman, because that’s the perfect all-around SAK for me. The Sécurité 17 had the same tool selection with a few differences: there is no parcel hook (I guess I can live without one), the canopener is different and there is a nailfile instead of a smaller blade. The only thing that bugged me a bit was loosing a blade to a nailfile (although it did come in handy later on). Buying a non-Victorinox SAK was a big deal for me, I had heard some bad things about Wenger’s fit and finish, but my knife (and the four or five I bought shortly after) has a very pleasing walk and talk.

The locking mechanism is similar to a lockback, and there is a big lever that, when depressed, disengages the lock. The lock seemed quite strong, it had no blade play at all (I’ve found some play in 110mm Victorinox and 120mm Wengers). Since I won’t be using an 84mm SAK to pry open car doors I ran just a couple of tests for the lock, without trying to damage it (I’ve seen those “let’s see when this thing breaks” tests, and find them a bit unnecesary). After trying to push it close with all my strength (and weight, which is greater than my physical prowess) and wacking it on a table, I was happy enough with the lock. I tried to see if it could be accidentaly unlocked, and didn’t succeed in making it fail. I think it can hold up to any reasonable use easily.

The blade geometry is very good. It is a bit shorter and thinner than my regular Victorinox (although not much thinner) and has more “belly”. It’s a decent slicer considering its size. It came very sharp from the manufacturer and held up well with just some stropping every now and then. I’m thinking about convexing the edge.

The size took some getting used to. I have big hands, so small knives are sometimes a problem for me, plus that piece of metal sticking out from the handle looked like it would make the knife quite uncomfortable to hold. After a few days of use my hand got used to it quite well. The protruding unlocking lever, while certainly not an aesthetic asset, was very easy to use and surprizingly didn’t make the knife uncomfortable to hold and use. When you hold the knife, the lever ends up between two fingers, and somehow doesn’t interfere with regular chores. It even gives you a bit more grip when fighting a rebelious screw.

I carried the Sécurité 17 with me both in a city and in some woodsbumming trips. In an urban environment, it’s hard to beat as an EDC SAK. It has a lot of tools in a very compact package.

The scissor’s spring seems stronger than the one on Victorinox knives (although I still have to break one of them), but I’m not really sold on the serrated edges. They are a bit uncomfortable when used to clip nails, they leave jagged edges (that’s when I was thankfull for the nailfile). Maybe I just haven’t used them enough.

The canopener doesn’t have a screwdriver, it would be nice if Wenger placed it at the end of the nail file.

The screwdriver locks when pressure is applied. I haven’t found this feature to be very useful, but it doesn’t hurt to have it. I guess somebody must find it useful.

I love this knife for city carry, specially for those places where everybody thinks a knife is a murderous weapon only carried by bloodthirsty savages. This SAK is as sheeple friendly as it gets, some girls even called it “cute”, but it still packs a great selection of tools and a locking blade.

As an outdoors knife I must say that the saw left me down a bit. I thought that it would work as well as the saw on my Farmer (they are almost equal in size), but the smaller handles have a bigger impact on performance than what I foresaw. It worked just fine on pieces of wood up to 2”, but when I had to saw for a longer period it became a bit uncomfortable. My Farmer was a lot easier to use. Besides, a locking 84mm SAK isn’t that much of an advantage for me because when I’m roaming the woods I always carry a fixed blade, a back up (either a smaller fixed blade or a folder) and my SAK (sometimes a 110mm or 120mm locking SAK replaces the back up knife).

I admit that I tried it on quite hard wood, but that’s the kind of wood I have around in the places I hike or hunt, so I need the saw on my SAK to be able to cut it well. So, I’d choose my Farmer or Huntsman over the Sécurité 17 for woodsbumming. Those with small hands might find it comfortable to use, the saw isn’t bad but the handle is just too short for me.

Having decided that this knives would work better for me in an urban environment than outdoors, I browsed through the different models and found one (I don’t know the number) that has the same stuff as the Sécurité 17, but replaces the saw with a phillips screwdriver and an “international wrench” (which actually works!) and the nailfile with a smaller clip point blade. I really like this tool set-up for every day city use.

I’ve used the Sécurité 17 and the one with the international wrench for a few weeks, and I’m very pleased with them. A couple of days ago I went to my grandfathers mountain house with some friends, he had been in the city for a month or so because he had to be hospitalized (he is OK now), and there were lots of little things to fix. I used the Sécurité 17 to get the phones running again (I don’t know how), fixed a water heater and a couple of lamps, and, finally, opened a bottle of great wine to reward me.

While I think there are better SAKs for outdoors use (unless you have small hands), the Sécurité 17 and the nameless Sécurité with an international wrench are excellent city SAKs. They work very well, in fact my only complaint is the saw, which IMO is a must for an outdoors SAK, since I don’t carry a hatchet or a folding saw. They are very good for kids. I gave one to a friend’s son, it fits his hands very well and the lock makes it a bit safer than regular SAKs (I’m still a believer in getting kids started with slipjoints, though).

Sorry for the lack of pictures, I don’t get along with cameras.