First of all, sorry for the lack of pictures. I always lost or broke the cameras I carried outdoors, so I don’t take cameras on my trips anymore (besides, I really suck at photography). 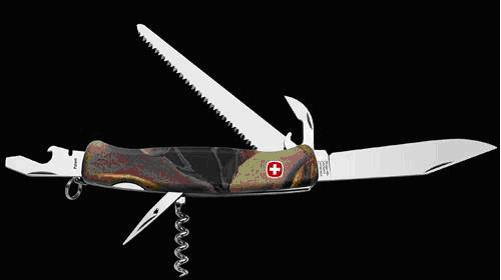 Anyway. I took one of Wenger’s Ranger knives for a little hike through the hills and woods (actually it was more like a twelve day trip`) and compared it to my most used outdoors SAKs: the Victorinox Hunter and Farmer.

My first impression upon seeing it side by side with the Hunter was: “This is HUGE!”. Ten extra milimiters might not sound like much, but once you open the blade and check the other tools out, you can really see the difference. The Ranger’s main blade is 92mm long , while the Hunter’s blade is around 84mm long. The Ranger’s saw is around 17mm longer than the Hunter’s and the caplifter feels like a combo-tool on steroids.

The Ranger is a little bit heavy when compared to the Hunter and Farmer, but not so much as to make it a problem.

The differences between the tools are the usuall you’d find between most Victorinox and Wenger knives.

The awl on the Ranger isn’t sharpened, although it is quite “pointy”. The Hunter has the normal Victorinox awl, both of them are quite lame when compared the the excellent awl on the Farmer.

The canopener on the Ranger is shaped like a hook with the edge on the back, so it doesn’t have the extra screwdriver the regular Victorinox canopener has (which is a shame, since it fits some screws on my stove perfectly). Some people find this kind of canopener easier to use, but I’ve gotten used to both combo-tools and Victorinox canopeners, and use them all with about the same speed.

The Ranger’s caplifter’s screwdriver locks when pressure is applied, which is a feature I’ve always liked about Wenger SAKs. I don’t know how useful it actually is, but I like to know it’s there.

The larger gutting blade is a bit more comfortable to use on some cases than the one on the Hunter (at least for me). We tried both gutting blades on a couple of hares and small deer (I don’t know the name in English, they are mountain animals similar in size to American Whitetails). The Victorinox was great on the hares, and the Wenger did better on the deer. I think the best thing about the Ranger’s gutting blade is its plain edge, although it is curved it is easier to sharpen than a serrated edge. This was the first time I used gutting blades, I usually relly on a small fixed blade to dress game, it’s much easier to clean.

Locks are bit different, too. The Ranger uses a locking liner which is dissengaged using a sliding button on the side of the handle (just like Victorinox sidelocking knives). It isn’t like the liner on the OH-Trekker, it’s placed like a regular right-handed liner lock (although it can only be dissengaged using the button). It’s quite strong, at least as strong as any 110mm Victorinox. I wouldn’t use it for very tough tasks, but it held up very well under normal use (which is quite demanding when you’re babysitting eight people).

My hand is very used to the Hunter and Farmer, but the Ranger felt very well, too. When wearing gloves, the Ranger’s extra handle length is very comfortable. Its only drawback for extended use, and I’ll admit I’m nitpicking, is that the caplifter’s spine isn’t rounded like the Hunter’s combo-tool and it’s a bit pointy, so it can cause some hot-spots.

The blade has a very good size for an outdoors knife, it came very sharp from the manufacturer. It works very well as a complement to a fixed blade. I found it to be a great slicer. Edge retention isn’t superb, but it is quite good (as good as any SAK).

The saw is the reason why I was interested in this knife in the first place. The teeth seem to be exactly like the ones on my Hunter, but the extra length and the angle of the saw blade with the handle make it perform a bit better (I don’t know why, but the angle of the blade and the handle makes it more comfortable to use). I did a little testing after gathering firewood, using quite thick pieces of hard and dry wood (around 3” and sometimes more). The Ranger easily outcut the Farmer (not surprising, considering the size difference), and it also outperformed the Hunter. I really like how the saw worked, I think it is the best SAK saw I’ve tried so far.

The Ranger has no toothpick or tweezers, but that’s not a problem for me. I always carry a SwissCard Lite and a 58mm SAK in my keychain, so those items are covered.

The real test for this knife came on the third day of my trip. I had to call my girlfriend (I won’t get into the reason) and phones were kind of hard to come by where we were (specially one that worked well enough to call Madrid). I left my assistant in charge of the group and convinced a local “baqueano” to lend me his horse, which wasn’t easy (it costed me two SWAKs and an Opinel), and rode towards the nearest village. After a couple of hours I came upon a few houses (if you can call them that), there they told me there was a phone a couple of kilometers away. I got there, bargained with the owner of the phone (I suck at bargaining, I was lucky not to loose the horse) and finally managed to talk three whole minutes to Silvia before the phone broke.

I started to make my way back, I thought I would manage to get back to camp by nightfall if I took a little shortcut. You see, the key word here is “shortcut”, what I understand by shortcut is more commonly referred to as “the wrong way” or “the longest and most difficult road”. Around half an hour after I lost sight of the houses a storm broke out, it had been overcast since the early morning. I rode a bit more, but I realized that I wouldn’t make it by nightfall and the poor horse wasn’t very happy with the long ride and the water. I was expecting rain, and had enough gear in my backpack to build a shelter for the horse and a tarp to cover my bivy bag (which didn’t need it, but I like some extra cover), some food for me and a few carrots for the horse.

The only thing I forgot was my leuku, shame on me. I had my Ranger and a Falkniven WM-1 (which isn’t exactly the best fixed blade to build a shelter). The Ranger helped me cut some branches and cut string to build the shelters. The saw performed very well, but the blade was a little tricky to close with gloves (temperature dropped to -3ºC during the storm, we had snow the next day). I also used the awl and corkscrew to fix one of the stirrups. The rest of the tools helped me make a nice warm meal. That’s about all I need from a SAK.

To sum up, I found the Ranger to be as useful as the popular 110mm Victorinox knives, with a slightly better saw. My only regret is that they don’t come in red; black and camo SAKs are quite easy to misplace (mine is camo because it was a gift). An obnoxiously bright lanyard might fix this.

Sheaths for 120mm Rangers seem hard to come by, it wouldn’t fit in any of the leather sheaths I have. Fortunately my brother had a nylon Wenger sheath which he was willing to part with (because he lost the knife). It is very well made and allows both vertical and horizontal carriage. It’s the best way to carry a SAK this big.