I’ve always wondered why Wenger ranger was not selected as an option for the new soldier, but I suppose whatever behind the reasoning will never be known to us. But I’d like to compare the predecessors of the new soldier, the OHT, and potential candidate from Wenger, the Ranger 78
Both have comparable tools, which consists of locking blade, wood saw, can opener, bottle opener, flat and Phillips screwdriver, and awl.

Size wise, ranger 78 is quite a bit larger than OHT, in both length and girth. This allows the blade and saw on ranger to be longer. The difference in girth from what I can tell is due to two different things. First the scale on ranger is much thicker, this may help the ergonomics when there is only the blade layer. But on models with three or more layers it doesn’t really add anything aside from unnecessary bulk. Also the ranger is fully decked out with aluminum liners between each layer, plus steel locking liner for the blade. On OHT, inside liners have been omitted, leaving only two outside liner plus steel locking liner. This does not seem to affect the functionality of the knife.

Onto the main blade. OHT has a serrated blade while ranger has a plain edge blade. Most people include me prefer plain edge, but there are times serrated blade is useful. Both blade are opened via thumb hole and locked open via locking liners. Ranger’s blade is optimized for right hand open and closing. To unlock the blade, simply push down the Swiss shield. It needs to be pushed down quite a bit before unlock so it’s unlikely to be accidentally unlocked. It can be unlocked with left hand just as easy, but the blade is hard to open with left hand. OHT’s blade can be opened easily via either hand,, however the liner lock is optimized for left hand unlocking. It can be done with right hand with some practice, but still nowhere as smooth as ranger’s lock.

Both knife have a wood saw as well. Both use the same double toothed design and are equally as effective. Ranger’s wood saw is longer so will cut faster, and is wider so can resist bending and perhaps breakage better. Ergonomic wise, because ranger’s main blade has a smaller hump compare to OHT’s blade, it’s more comfortable to hold while sawing. Sometimes OHT’s saw will catch on the aluminum liner while closing, mine already bit a chunk out of the liner.

Bottle opener/flat screwdriver is standard on both as well. Ranger’s opener is longer while OHT’s is wider and thicker, but I don’t think it matters either way because the weak link is mostly at the pivot. Both locks open. OHT use liner while ranger use Wenger’s pressure lock. It locks the blade open when it’s under pressure, i.e. while turning a screw, and unlock as soon as the pressure is released. I don’t mind either mechanism, but OHT offer a half stop where bottle opener stops at 90° to handle to allow more torque.

The can openers are the same as those found on standard Victorinox and Wenger. They could’ve been made larger to take advantage of the larger frame in my opinion.

On the back there are Phillips driver and awl. OHT’s awl is sharpened so better for drilling, but did not include an sewing eye like those found on other Vics for some reason. Ranger’s awl does have the sewing eye but is not sharpened. It could not be used for drilling but can be used for sewing and other tasks where sharp edge is not desired.

The Philip driver on ranger comes to a finer point, and can be used to turn some small screws that OHT cannot, like those found on back of car remote fobs. 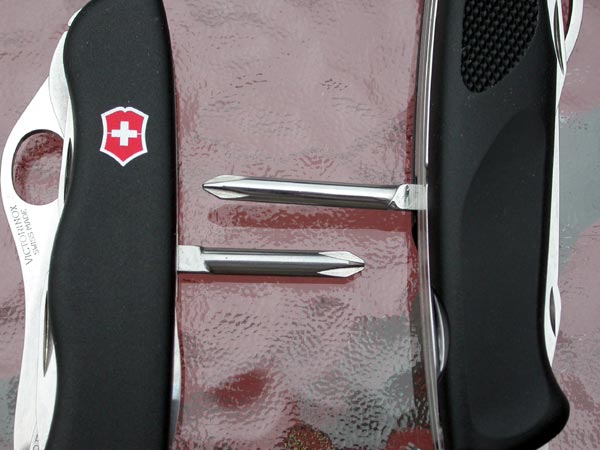 OHT does include toothpick and tweezers that ranger lacks, however when transformed into soldier they are deleted.

Overall I like both. For EDC tasks I will probably pick OHT due to its more compact size. I feel the evo scale on ranger is really unnecessarily bulky in this case and doesn't add to any ergonomics. This also applies to the contoured handle on OHT, your fingers won't fit into the contours, because all the folded tools get in the way. I haven't had the chance to compare them in outdoors yet, so can't say anything about that.