Ok, So my sister was snooping on my Amazon wishlist and she ordered me a New Soldier.  I have had it for a week and since we have been renovating my wife's old bedroom I decided to use it for everything I could.  Below is a list of how it was used and my opinions on it.

Painting:  First order of business was painting her old bedroom.  Unfortunately no one had a paint can opener, so out came the bottle opener/prybar on the soldier.  It was slow going but it opened with very little effort.  You have to work slow, but it will open the paint (opened three cans of it).  All the screw drivers got a workout taking off all the light switch and outlet covers.  Again they worked like a charm.  I found that I would open both the can opener and bottle opener and put it in my back pocket to have whenever I need to unscrew something.

Putting up blinds:  We got some Roman Blinds for the baby's area to keep out as much light as possible, so he will sleep a little later in the morning.  However the old screws were stripped and I could get the covers off, so I pried them off with the prybar.  This thing can take some torque, and the scales never flexed once.  The phillips driver was used to screw in the new covers and the blinds went up without a fuss.

Taking apart a desk:  The phillips driver made short work of taking apart an old drafting table.  Yes, the drivers slip a little but not enough to finish the job.  It was also used to help dismantle an old entertainment center. 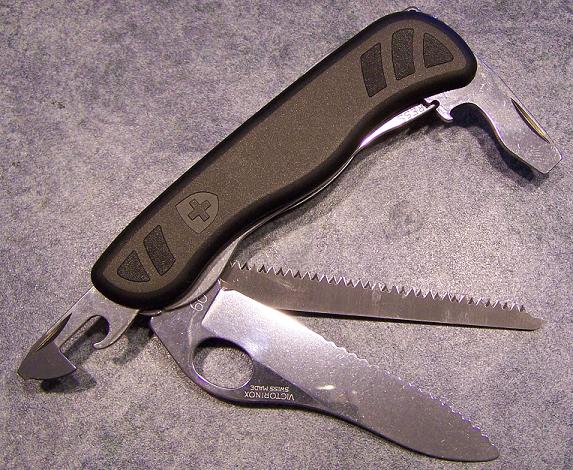 Various cutting:  There was many times a strings needed to be trimmer (blinds), trash bags need to be cut up for drop cloths (painting) that the OHO blade really shined.  Is very sharp and cut through many different materials with the greatest of ease.  Sure, none of these tasks were very difficult put it was nice to know it could handle it and many more.  I find it a little more robust feeling than the OH Trekker, but that may just be my perception, as I am unsure as to whether they share components, mainly the main blade and bottle opener.

Pick one up as soon as you can.

Overall:  This tool is an excellent buy and can handle anything you can throw at it.  The scales are very comfortable and the rubber inserts really help when using the drivers.