Well it figures- I finally get famous by writing the OHT article for Tactical Knives magazine and Victorinox turns around and changes everything on me!  Oh well, C’est la guerre!

The new One Handed Trekker looks very much different at first, and also seems somewhat awkward- bigger blade, odd shaped hole etc, but you really have to look closer to get all of the interesting differences identified.  Victorinox doesn’t make a habit of improving things just for the sake of improvement, they “tweak” things here and there to make them work better.  The new OHT design does just that.

The most noticeable change is the hole which is somewhat more rounded than before.  Skeptical, I tried it and it actually is easier to open.  I discussed the matter with the SOSAK HITMan and he thought that it might be due to the thumb pad being able to rotate in the hole easier due to the shape.  It’s entirely possible, I couldn’t argue as I’m not that smart- he figured it out without even having one!  Whatever the reason, it is easier to open one handed.

Another interesting feature is that the blade is broader- taller from the edge to the opening hole.  It’s not much (old one is 27.5mm from edge to top of hole, new is 29mm) but as many folks have mentioned it, it’s obviously enough to make a difference.  As was pointed out by another member, this would increase the life expectancy of the blade as more metal means you have more to sharpen away over the years.

With the larger blade and different shaped holes, there have been some concerns about the “height” of the knife when closed.  Well, I dusted off the calipers and measured that as well- both knives are 34.5mm from the spine to the top of the opening hole, and despite what appears to be major differences in size and design, the new OHT fits snugly into the On Scene Tactical kydex sheaths that I have.  Anyone who is familiar with kydex rigs knows that they pretty much fit what they are designed to, and nothing else, so that proves the shape can’t be too far off.

Interestingly, even though Victorinox has always claimed the tang stamp as the official method of verifying that the knife is a real Vic, there is no tang stamp on the new OHT, on either side of the blade.  Instead, the words “VICTORINOX SWISS MADE” are stamped just forward of the opening hole, and only on the shield side of the knife.  This makes sense as the old tang stamp “VICTORINOX SWITZERLAND STAINLESS” is somewhat obscured by the liner and lock mechanism, so the “STAINLESS” part isn’t really visible.

Speaking of liners and locks, that’s another change.  In addition to the blade being easier to open, it was also easier to close.  The opening of course caught my attention the most, but when I looked, I saw there had been some changes to the liner lock as well.  The lock actually sticks up somewhat higher than the old one making it much easier to access.  This is a very nice feature, especially when wearing gloves.  The only drawback is that your hand sits a fraction of an inch farther back from the blade, but at least you don’t have to worry about accidentally disengaging the lock.  In case you could never figure out how to disengage the lock at either end, Victorinox helps with that too- the new liners have “PRESS” stamped into them to help you figure out how to operate it!

The last difference I noticed is that the tip is more rounded than the old one.  None of the OHT’s have ever been issued with a serious point, certainly not on par with the piercing type points on most tactical knives, but the new OHT has gone just a bit more round.  My guess on this is that Victorinox is trying to get folks out of the habit of poking things with the fragile point, and into using the pointy awl instead.  I am certain they are sick of replacing knives with broken points.

Other than that, the new OHT is available by itself or with a really nice sheath and 2xAA LED light, which is the set I got.  Quite frankly, I like the sheath, and I really like the improved light grips, but that’s an article for another time!  Suffice it to say, the set is worth the extra few dollars to get over just the knife itself.  I don’t have pricing info handy, but a quick message off to This email address is being protected from spambots. You need JavaScript enabled to view it. can solve that mystery pretty quick!

Speculation Time!  From here on in this article is all guesswork, so feel free to record it to throw in my face later on if I am wrong. 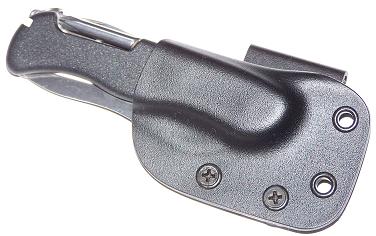 With the recent hubub about the Swiss Military Contract being opened up to all manufacturers worldwide, and the concern that there may be a foreign, low quality knife issued to the troops, the redesign of the OHT seems to lend credence to my theory that we will see some kind of OHT variation being the new issue knife in the near future.  Only time will tell for sure, but I’d be willing to put money on this one!