Tonight’s bout will be a grueling winner takes all event. 20 minutes of hand-to-hand comparisons, I don’t envy anyone that’s in the ring tonight.

You’re right Swiss Man, The OLD has the experience but the NEW has the features that people are asking for.  Tonight is anyone’s guess; let’s go to the referee.

Ladies and Gentleman tonight we have the long awaited bout for the GAK championship. 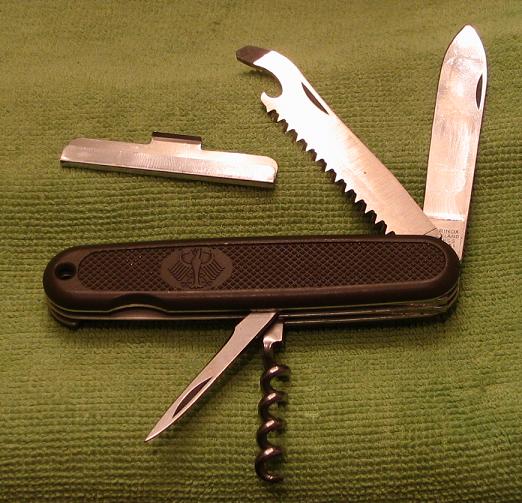 Gentlemen this is a no holds barred event when you hear the bell come out fighting.
“Good luck.”

Coming out of the corner with the cockiness and arrogance of youth NEW thinks he has this tied up due to the age of the Champion.

Blade steel is the first challenge but since it’s the legendary Victorinox excellence it’s
no challenge, point awarded to both.

Separating the two the referee looks at the blade configuration, for ease of opening and closing and the added locking ability NEW is rewarded a point.

New’s saw chewed thru wood like a Ginshu knife thru shoe leather, the OLD bound up and was hard to push / pull thru.  Another point to NEW.

Driving screws (both standard and Phillips) went to NEW for the large locking
cap lifter / screwdriver and since the OLD lacks a Phillips or even a can opener with a tip small enough.

Opening cans proved to be an interesting challenge; both worked but NEW gets the point for cleaner edges.

Coming at one another with a genuine determination the challenge is the awl.
A tie is called; a point is awarded to both OLD and NEW.

“To be honest with you Swiss Man I wasn’t expecting this much of a challenge, both are going at it with a renewed strength.”

Staggering around the ring OLD catches his second wind, propelling himself off the ropes with a renewed fury the corkscrew was the next challenge.

Blindsided by this NEW doesn’t know what to do, he throws up his hands and hides his face in shame, the point goes to OLD.

The bell rings the bout is over.

Here are the results (actually they are very one sided) the only thing that the OLD won was the ability to open wine bottles and carry a mini screwdriver.

Feels good in the hand, I carry an OHT hanging in my pocket without feeling weighed down or bulky.

Not complaining but the only thing different I would do is add the texture to the grips like the OLD version.

And not too offend any OHT owners but I personally don’t have any problems with the combo blade (I did at first) then I started using it more and more.

I like the fact that the plain edge is in the rear, where it needs to be (IMHO).
Better for stripping wires and sharpening pencils.

After all what do you use a serrated blade for?  Cutting rope, cardboard etc.,
You don’t want to put the blade all the way in for your cuts. Again IMHO.

If you don’t like the combo edge then read the article “OHT Serration Removal” by Saunterer (remember if Def can do it then anyone can, just kidding Def you know that you are loved)

Bottom line is the OLD is a great GAK but the NEW is better.

There is nothing wrong with a classic, they are fun to handle, great to look at and awesome to collect but there is a reason that they have been replaced.