The idea behind this article is pretty simple. I always carry a SAK and a folder. I wanted to see how I would feel carrying just a SAK or only a single bladed folder. For six days- three outdoors and three in the city- I’ll carry a Spyderco Paramilitary, then I’ll do the same with a Victorinox Huntsman. By the end of the twelve day trial period I will, hopefully, have some useful conclusions.
Why did I choose those particular knives? First of all, I think that they are both excellent representatives of their class and they’ve proven their worth to me over time.
The Huntsman, with its excellent tool selection and rather compact size is probably the closest thing to the perfect SAK for both urban and outdoors use. Sure, I usually prefer a Farmer for the woods and a Compact is enough for most of my urban needs, but I needed a SAK that could manage everything reasonably well. I didn’t want to choose one of the bigger locking models from Victorinox or Wenger (or one of Wenger’s Sécurité knives), because I wanted to do this test with one of the classic “little red knives”.
The Paramilitary has all the features that I look for in a folder: one hand opening, excellent blade steel, awesome handle ergonomics, a good lock with a blade big enough to tackle almost any chore. I didn’t choose a more traditional folder in part because there is already a very good SAK and slipjoint comparison article and also because I wanted a knife that could be opened with one hand and clipped to a pocket.
I don’t intend to bash any of the knives or prove one of them useless. As much as I am a SAK lover, I also enjoy “tactical” (I hate that word) folders a lot.
Enough senseless rambling, lets get these babies on the field! 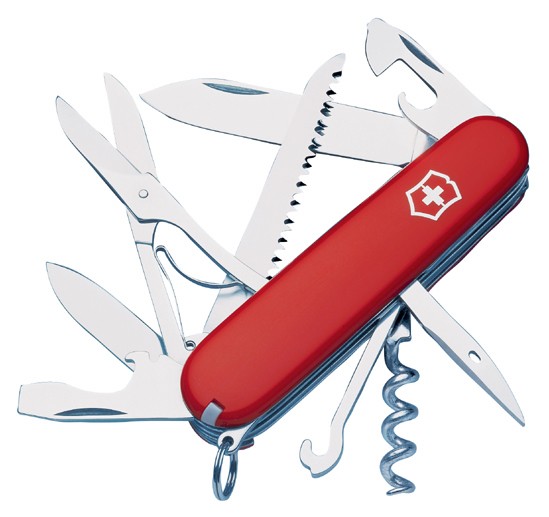 Back from the woods and mountains and into this damned crowded city again. Anyway, I attached the Huntsman to a Victorinox belt hanger (I have a phobia about loosing SAKs) and I was off to the university. On my way out I ran into the mail man with a package from our very own Tim, so the Huntsman’s first task was opening a box with some more SAKs.
If SAKs are useful outdoors, they are absolutely essential in the city, where we are surrounded by lots of gadgets with the bad habit of malfunctioning. Like everyday in my life since I was a little boy, I used every tool in my Huntsman for a plethora of different things, from trimming my nails to fixing a sewing machine. That’s what I love about that little red marvel, you don’t even feel it in your pocket and it’s always there to bail you out. Only once did I have to resort to the SwissTool in the whole three days.
However, there where a couple of times when a one hand opening knife would have been nice and for the heavier cutting tasks a bigger blade and more hand filling handle would also have been welcome. I cut lots of thick leather, raw cow hide (I have weird hobbies) and rope everyday and although the Huntsman could take it, I would have preferred the Paramilitary for those tasks.
Another two very important areas for a city knife, at least for me, are emergencies and self-defence. These are two things I’m not sure a regular SAK can handle. By emergencies I mean things like cutting people out of their shoes or safety belts in a car crash, or cutting their clothes to get to an injury. You want a tough locking blade for those things, and quick single handed deployment is important, too. I’m not a mall ninja who day-dreams about saving the day, I’m a SAR worker and although most of my expertise is geared towards outdoors emergencies and natural disasters, I have been the first responder on a couple of urban accidents just because they happened in front of me or near my house. Self defence can be an itchy topic, so I don’t want to get into it too much, lets just agree that it’s not one of the Huntsman’s intended uses and that the Paramilitary would probably outperform it. On the other hand, I wouldn’t feel ill equipped with an OH-Fireman or OH-Trekker at a car crash or other similar accident, but they aren’t part of this test.
A great, and sometimes overlooked, advantage of a SAK in an urban environment is that some people don’t even consider them proper knives and don’t feel threatened by them. Even some of my friends who are knife users are biased against some types of folders (like automatics and balisongs) because they are pictured as “bad guy knives” on TV. A big one hand opening folder can get some strange looks at some places, yet you can open a SAK at a kindergarten without getting so much as a raised eyebrow.
Finally the Paramilitary got its turn. I felt strange walking out of my house without a SAK in my pocket for the first time in years (actually, I cheated and threw a Farmer in my backpack). Having a substantial folder close at hand was great, again I was amazed with the edge retention of S30V, I did lots and lots of cutting and it kept shaving hair off my arm.
Although most of the cutting chores that had seemed like a bit much for the Huntsman, or were uncomfortable to do with it for a long time, were easily performed by the Paramilitary I soon began missing the extra tools. Just go a day without a SAK and you’ll see how often you use it! A few times throughout the day I had to use the tip of a $100 folder to struggle with tasks that would have been a walk in the park for a $15 SAK. Luckily I didn’t damage the blade, but I proved that a cheap SAK, even a humble Spartan, close at hand will really make your folders last longer.
After carrying each of the knives on their own, it was clear that the best thing was to carry them together. At least in the city the Paramilitary (or a similar knife) is very useful and anything it can’t handle can probably be fixed with some of the features on the Huntsman. The SAK also allows you to keep a low profile at places where a bigger knife would draw unwanted attention and still be able to cut open a box or replace the crappy knife supplied at a mall’s food court.