I have enjoyed camping since I was a child. I was raised in a hunting family and we made yearly trips to a deer camp that quickly became an almost Christmas like holiday for me. The cool crisp fall air carrying the heady smell of freshly fallen leaves, and the frosty mornings in the forest became more of a home to me than any house would ever be. I lived for the outdoors.

There are plenty of people out there who feel that camping involves a recreational vehicle with more square footage than most mid sized homes, but I am not one of them. Personally, I like to walk to an area where any evidence of man is well hidden and the only tools I take are those I can carry on my back…or in my pocket.

After the tromping down the beaten dirt path I crossed through the red metal gate marking the beginning of private property on which I would be camping. I crossed a beautiful sloping field with light wind-swept grass to a wood line filled with chittering birds. I stepped into the woods and started down the steep incline to another open field below.

Evidence of an old homestead was found after crossing a small bubbling stream neat the back corner of the meandering field. Here the flat grassy valley bottom ended in a point then turned to another forest of undetermined size. I crossed into the forest and continued along the edge of the small stream.

I could see fish playfully darting around the pool of water and I could see that tonight’s meal would be tasty if my survival skills were sufficient. A few miles in, I found a place that was flat and peaceful. I could hear no evidence of mankind and saw no sign that the woods had been disturbed any time in the recent past. This rural area was some of the most sparsely populated in the state.

Because I had done so many times in the past, I made quick work of setting up the campsite. Already the sun was starting to fade and the failing light was giving away to cooler, crisper air. My camp was set so I then turned to using the most useful tool in my whole stack of equipment…my Victorinox Huntsman.

I have been a major fan of the Swiss Army Knife for many years. As I have gotten older I have become more aware of the usefulness of this beautiful tool. My younger years were filled with buying black tactical wonder knives, but my mature self was looking for something better.

It did not take long to realize that the old Swiss Army Knife that I had been hanging onto for so many years was perhaps the best tool for an avid outdoorsman. After resurrecting my appreciation for this knife I quickly started adding more to my collection.

I discovered the Huntsman quickly. This knife contains the features I value most in a “survival” knife. It has large and small blades, can opener, bottle opener, wood saw, scissors and an awl. There is a smattering of other tools on the knife, but these were without a doubt, the ones I needed most.

The particular Huntsman I choose to carry is a little more rare than the common model. Although many of us recognize the Swiss Army Knife by its bright red handles, mine is bright yellow. I like it because it is unique, but the yellow serves to make my knife easy to find if I set it on the ground. It definitely is an attention getter.

I found this little treasure on ebay and liked the look so much that I had to get another. The one in my pocket has become such a friend that I can hardly stand to be without it, even around the house. I have made some additions that increase the usefulness of the knife.

I added a lanyard of small blue and yellow climbing cord recently and it has vastly added to the ability of the knife. The lanyard makes it easier to extract the knife from a pocket and it lets me add some other useful items to my knife. The lanyard contains a compass, an LED light, and a small airtight container by Bison Products that contains matches.

Since I wanted the ability to quickly remove the lanyard, I attached another smaller piece that holds my main lanyard via a barrel lock. This allows me to always have my extras with me, but remove them for any cutting chores where they may get in the way. For me this is an almost ideal set-up.

A simple quick spear set up made quick work of two fish from the freshwater pool I had discovered earlier. The Huntsman had made the job very easy, from sawing down a long straight sapling, to cutting individual barbs from a nicely dried piece of cedar. I attached the 3 barbs using the dental floss that I had packed away in my Maxpedition pack. Ambushing the fish was relatively easy in such a small pool of water.

That night as I ate a dinner of fresh fish and some rice I had packed away, my thoughts drifted back to my Huntsman. The knife, and its added lanyard have been of use to me almost daily. The LED light serves a great deal of uses around the house and even at work. The matches have also been handy to have on more than one occasion.

The compass on my lanyard seems like it would be of limited use, but turned out to be a Godsend when I found myself in a huge prairie in Kansas. We Arkansas boys can find anything in the Ozark foothills, but in a flat field that stretches for miles (especially on an overcast day) and we can get a bit mixed up. It has come in handy around Dallas and Memphis a few times also.

The campfire (lit by a match from my Bison waterproof capsule) started to die down a bit and I let the coals warm me before turning in. The LED light was useful for finding my way into my meager threadbare sleeping bag. A small net bag in the tent kept my knife safe, and near-by, for the night. Midnight bathroom breaks are made easier with a small light.

The next morning I stoked up the fire and warmed my bones while listening to the chirping song of early morning birds. Their greeting was a welcome change from the rumble of cars and the sharp bite of odorous exhaust fumes.

I whittled away aimlessly on another piece of the dried cedar while enjoying the morning melody. The Huntsman fit my hand well, and the thin Swiss Army Knife blade was perfect for such a cutting chore. 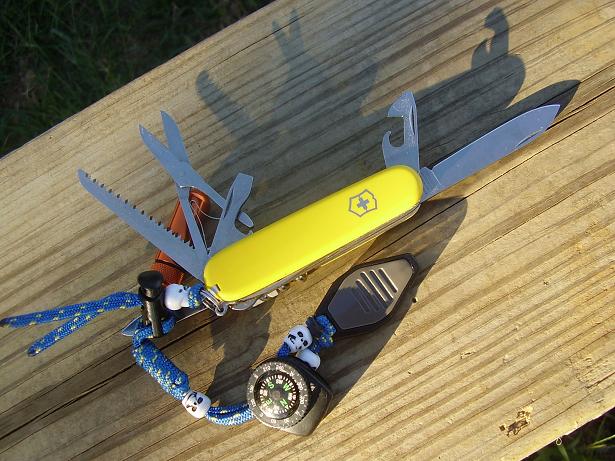 I spent some time later that morning looking for any food that nature might provide. I scraped some inner bark from a pine tree to dry for pine flour. I also located some wild carrots to add to the afternoon meal of Ramen noodles. These were chopped up and stored in a small plastic bag until needed.

The rest of the day was filled with easy chores designed to create easier living. My Huntsman came in very useful throughout the day and once again I was glad to have my companion with me. I have carried many knives in my life, but so far none have fit the bill like my yellow Huntsman.