SAK Vs The Hurricane

It's hurricane season here, and two weeks ago we were almost hit with Hurricane Bill, the storm that ponded much of the east coast of North America.  Fortunately for us, it turned at the last moment and passes us by with only reasonably heavy winds and a large amount of rain, which caused some flooding in my garage, but nothing I wasn't expecting or prepared for.  Then, a week later we got the tail end of Hurricane Danny, which fortunately was again not a huge cause for alarm, despite being a bit worse than expected.


In the day or so before the storm was set to hit the local stores were once again mobbed by folks looking for last minute items like propane and batteries, both of which were getting scarce, and the fact that Bill hit us about 24 hours earlier than expected didn't help much either.

A few years ago we had our last serious hurricane, a category two storm called Juan, and most of my city was without power for a week- outlying areas were blacked out much longer.  Old trees that used to frame city streets and that had survived our last major hurricane about 50 years ago came down, tearing apart houses and snapping power lines, which was the big reason it took so long to get power restored- lines were down almost everywhere.

Then, as now, I have always been prepared.  I'm not a hard core survivalist, I live "on the grid" and I don't stock canned peaches in my basement waiting for doomsday, but I do believe in being prepared.  That meant several propane bottles for the Coleman stove, a fully stocked first aid kit (and I do more than just band aids- I have in the past, out of necessity done my own stitches, an act I don't recommend anyone else try unless there are no other options as it's a wholly unpleasant experience!), food and water (although living in the city means that water is not likely to ever go out since I'm not dependent on a pump to bring water to me), gas for the Jeep, and of course the means to fix minor problems and open virtually any kind of packaging- and this is where the SAK comes in.

While a good knife or tool isn't the answer to everything, it does allow me the ability to fix problems on the fly, without having to go looking for the "right" tool, which in winds exceeding 100km/h, is not that convenient!  Having it handy did allow me to trim some rubber stripping to try and minimize the leakage into my garage, open some packages and trim away some smaller branches that threatened to cause damage. 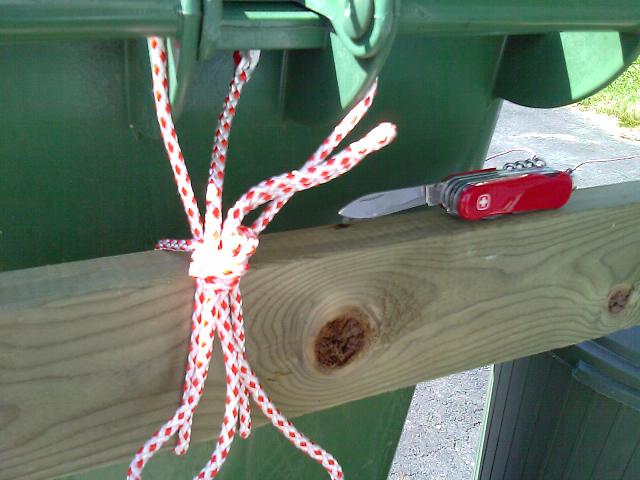 Where it came in most handy was during the preparation process- little, non life threatening things though, like cutting rope into shorter lengths for simpler things like tying down my garbage cans so they wouldn't blow away.  It would have taken twice as much time or three times as much effort to either get or carry around all of the "right" tools to do all the things that needed to be done!

The government says you should be prepared to survive for up to 72 hours- which I swear I could do standing on my head, although I have no interest in proving that!  72 hours sounds like a lot, but even those relatively unprepared should be able to last that amount of time unless they are in extremely hot or cold areas or are surrounded by dangerous animals- or unless their entire city is under water, but since I live on the coast and am about a hundred feet above sea level I think I'm pretty safe!  In mild temperatures the average human is not likely to die from dehydration in 72 hours, let alone starvation, so in reality, preperation as more about comfort than survival, and I intend to be as comfortable as possible in a worst case scenario!

As I said, luckily the brunt of the storm missed us and I didn't need to make use of any of the stuff I'd prepared except for the SAK, but one thing they all did was allow me to relax a little bit knowing that the worst would be fairly easy to deal with!