With all due respect to the literally hundreds of models they produce, I have always been partial to what I feel is the handiest tool they make- the ratchet, only available with the bit kit!

Anyone familiar with the ratchet knows what I mean- this is an amazing design, even from a company that is famous for amazing designs. Initially I was doubtful that anything so tiny could possibly be useful, but as with most Victorinox products, I was pleasantly surprised.

First off, the specs- at a mere 35g (1 1/4oz) and about four inches long it boasts a one way ratcheting head (yes, I said one way but I'll get to that shortly) and a solid bit driver in the base of the solid stainless steel handle. The slot in the head and tail are designed to accept 1/4” hexagonal screwdriver bits, which is about as close to a universal standard as there is.

The one way head is open on both sides, so even though the socket only turns one way, all you have to do to turn bits the other way is to turn the ratchet around and insert the bit in the other side. If you are like me, you will probably turn it the wrong way first, each and every time you try to use it. Well, Victorinox thought of that too, and only marked one side of the head. If you can see the Vic shield, you are tightening the screw. Of course, if you are like me, you probably aren't going to remember that when you need a ratchet, but they were trying!

Because of that standardization in bits, there have been a number of other uses for ¼” sockets, the most common, at least in my house, being the screws that hold a computer together. While I'm not an expert in computers by any stretch of the imagination, I am handy and know a few things, so everyone I know brings their computers to me to fix or upgrade, meaning I see these screws all the time. Some are pretty nasty and gunked up- all that dust that a computer sucks in can build up on screws and seal them in place, so it's important to have some leverage on them, and that's where the ratchet really shines. And, if you think that you might need more elbow grease than you feel the ratchet can take, then you can use the socket in the handle. 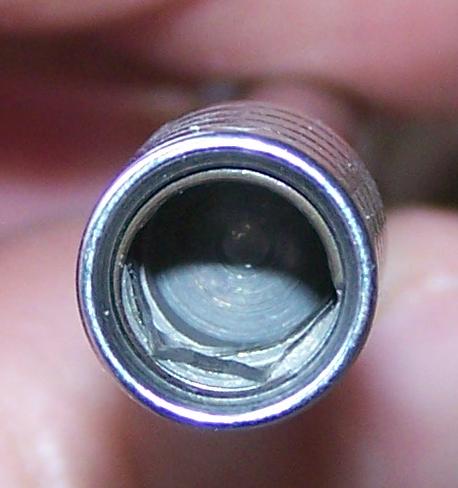 The ratchet comes packaged with certain Spirit models, or you can get one direct from Tom just by sending him an email at This email address is being protected from spambots. You need JavaScript enabled to view it. for more details.