Battle of the Minis

Here we go with the battle for Featherweight Champion of the Keychain!  In this corner, wearing green scales is the Wenger Esquire.  Tonight's opponent in the opposite corner, in the red scales, defending the title of bestselling knife of all times, featured in the Museum of Modern Art, the Victorinox Classic!

This one is a battle of the minis- the Wenger Esquire and the top selling knife of all times, the Victorinox Classic.  In this case, the Classic we are going to use is NOT the SD version to make certain this is kept fairly even.
First off, the Wenger is noticeably larger, but not really enough to make a difference on a keychain.  The Wenger is 64mm compared to the Victorinox's 58mm.  Both are extremely pocketable and are almost completely unnoticed on a set of keys until needed.

This small difference in size means that the Wenger's blade is a little bigger.  Of course at this size it is not likely to make that much of a difference as they are not likely to be used for any serious cutting chores.  I give the Classic a very close second in blades due to the size.

The nailfiles are physically the same size as the blades and so the Wenger's would seem to take the cake here as well.  Oddly enough, that is not the case.  The Victorinox's filing surface is actually a bit larger than the one on the Wenger's, despite the Wenger's bigger size overall.  However, the Wenger compensates tor this by having a better texture, and in my experience, more effective file.  I am going to mark these as even as they both have advantages.

The scissors are next and there is a world of difference here.  The Wenger scissors are almost twice the size of the Victorinox ones and so would probably be more useful.  Some folks however might not like the serrations on the Wenger, but I don't feel that it is that big an issue.  I also feel that the Wenger has a superior spring system, despite the slight amount of movement of the blades when cutting.  Again, I rate the Wenger higher than the Victorinox. 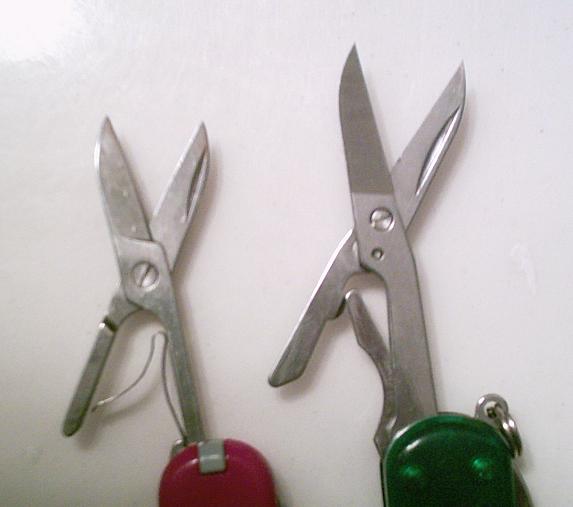 Where the Victorinox really shines thoughis with the toothpick and tweezers.  Despite the smaller size of the Victorinox, the Classic's tweezers and toothpick are actually quite a bit more substantial than the Wenger's versions.  The toothpick on the Esquire is flimsy and while useful, is not as effective as the Victorinox toothpick.  Ditto for the tweezers.  Definate advantage to Victorinox.
Overall, I am glad to have either tool, and they both earn the same number of points, although in different areas.  It would be up to the individual to decide if the scissors or the tweezers are more important.  I also feel that adding the SD tip to the Classic would also give it a slight edge over the Esquire, but it would also be easy enough to file down the Wenger's nailfile into an sd tip too.
Get one of each- they are affordable enough, especially secondhand ones...