Making a Soda-Can Stove with only a SAK

I've been making and using soda-can alcohol stoves for a number of years now, but I've always done it at home with all the proper tools at my disposal. Somewhere I read that it could be done in the field with only a Swiss Army knife, so I decided to put it to the test.

While I could have chosen any number of SAK models with more tools and features, I went with one that would more likely be found in my pocket…the Wenger Soldat.

Two empty cans are needed to make a stove. There are variations in the bottoms of the cans depending on manufacturer, so it is best that they are of the same brand.

To begin, the dished portion is removed from the bottom of one can. I used the tip of the blade to score the inside perimeter of the bottom rim. The safest way I found to do this is to place the can on a flat surface and rotate it while holding the knife steady.

When the scored line became deep enough, the tip of the blade started penetrating the can in spots. At this point I popped the center out with a couple of light taps of the closed knife.

I was surprised at how well the awl worked to make the burner holes. The sharp point allowed me to easily make very small pinholes. I started with four holes at 3, 6, 9 and 12 o'clock. Then divided the space between in half, then in half again for a total of 16 holes.

The can needs to be cut off about 1” from the end. I rested the knife on a block of plywood approximately the right height and rotated the can against the tip of the blade. The can was then turned over and scored on the other end. This was repeated on the second unaltered can.

The ends of the can could now be removed by tearing along the scored lines.

The results are top and bottom stove pieces, two “tubes” from the center and the tops of the cans.

I split one of the “tubes” by folding and sharply creasing the edge with the back of the knife. This worked the same way as scoring the aluminum, opening the fold will part the material in a nice neat line.

The piece was folded lengthwise and creased again to get a strip about 1.25” wide. The measurement did not need to be exact; it just needed to be at least .25” wider than the height of one of the stove pieces.

The strip forms the inner wall of the stove and is rolled into a smaller ring to fit inside the inner rim of the can bottom. The bottom edge of the rim was notched approximately .125” in three places and the tabs bent out to hold it together. The notches should not be too deep or large; their purpose is to allow fuel to reach the outer vaporizing chamber. If the notches are too high the pressure chamber will be exposed sooner as the fuel level drops, causing a loss in efficiency. In the right hand photo, you may be able to just make out the top of one of the notches just left of the seam.

I used the back of the cap lifter to crimp the end of the burner piece like a bottle cap. This made it easier to insert into the bottom piece. 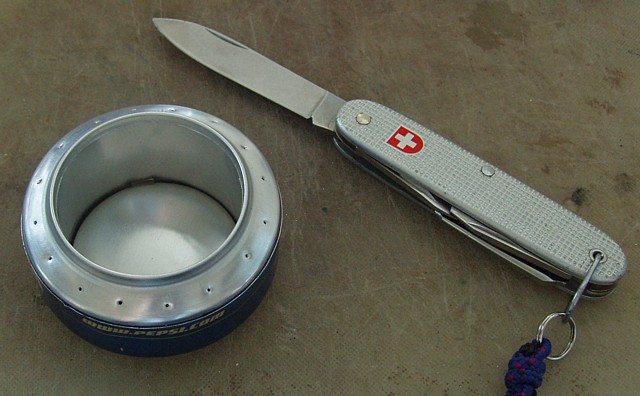 Finished stove and the '91 Wenger Soldat, and I managed to do it without cutting myself.