End Of An Era

Sometimes dragging one’s feet is a good thing.  In this case, it is a mixed blessing- because we are late this month (again!) it has allowed me to include some information that otherwise would have gone into the SOSAK BLOG or more likely waited until next month.  So, the fact that I can include it here and now for everyone to read is the good side.

As I read through the latest issue of The Victorinox Blade, the quarterly newsletter issued by the Official Victorinox Swiss Army Knife Collector’s Society, I was very disappointed to learn that Dan Jacquart, the president and founder of VSAKCS, is retiring.  I could recap the blurb that he wrote, but I feel his words are perhaps the best, so, reprinted here (without his permission, but I hope he won’t mind) is his farewell.

I have had some contact with Dan over the past few years, but not as much as I would have liked, but the demands of work and home life coupled with the management of my various web enterprises and more recently the small apartment building I bought have all conspired to less and less opportunities to spend time simply chatting with people who hold common interests.  Dan has always been a great source of inspiration and information to all of us here at SOSAKOnline, and I hope to see him continue with other projects in the future.

In addition to the quantitative benefits of knowing Dan, I have to say he is one of the nicest guys you’ll ever meet too.  While I’ve never met him face to face, I have talked to him a number of times on the phone and through many emails, and I have always come away with the feeling that the man is not only passionate and well read about Swiss Army Knives, but he always shows a genuine interest in those around him, whether it’s SAK related or not.

I’m sure that many folks out there will miss Dan and the quarterly newsletter as much as I will, and I wish him the best of luck in whatever he pursues next- if the results of VSAKCS are anything to go by then I’m sure he’ll excel at whatever he turns his attention to now.

In honor of Dan, I’d like to sign off on this article with his signature line.  For all you’ve done for the world of SAK collectors Dan, and on behalf of all SOSAK (Now Swiss Army Knights!) Members the world over: 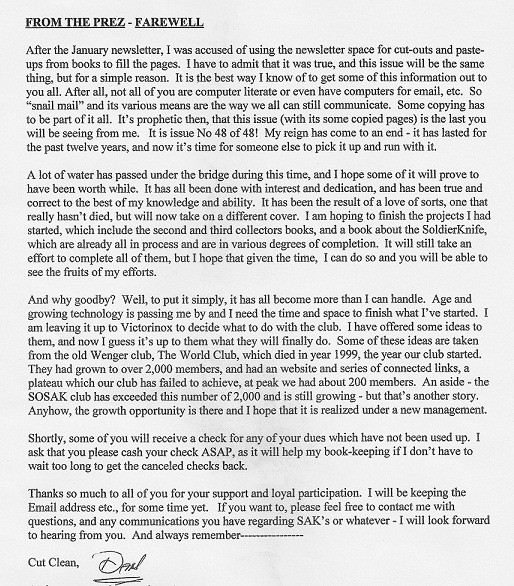