I was looking through the new Blade and saw a couple knives that looked handy. Large handles and small (by comparison) blade. LOTS of control of the blade with that big ole handle. But they were fixed blades.
I seldom carry a fixed blade, but wondered what I could figger out for a folder.

Tim sent me an old climber(Thanks Tim)that was in pretty good shape except it was naked, no scales. Well I found an old carbon fiber RC10 remote control car chassis at the swap meet and the rest is history.

I had some extra time to work in the shop today and decided to attempt to customize a Vic Soldier.

Today, I thought I would try to see what the "usable" glowing times were for a set of Stayglow scales.

Since there has been a lot of discussion about the Victorinox One Handed Trekker (OHT), I thought I'd share how I removed the serrations and chisel grind. It is a fairly easy job, requiring a few tools and some elbow grease.

Great news!  Thanks to a generous donation to the site by our esteemed member Francisco, we now have a brand new in box One Handed German Army Knife up for auction! 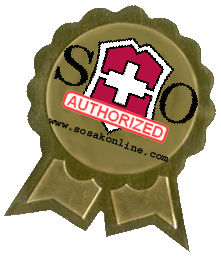 Some folks may have seen the Authorized SOSAK Dealer Seal.  This seal certifies that the dealer using it has the complete support of all members of SOSAK and is very highly regarded for their dedication to SOSAK, it's members and their customers.

ALOX is beautiful and functional.  What better material for the REAL Swiss Army Issue Knife?