This knife was done about 15 years ago and is the one on which I learned how to do hardware Mods.

This is an Explorer provided by Tim at Felinevet for modding. The knife was in such good shape, I could have just cleaned it up and slapped a pair of scales on it!

These are simple modifications that I think of as in the style of those in Kathryn Kane's book. 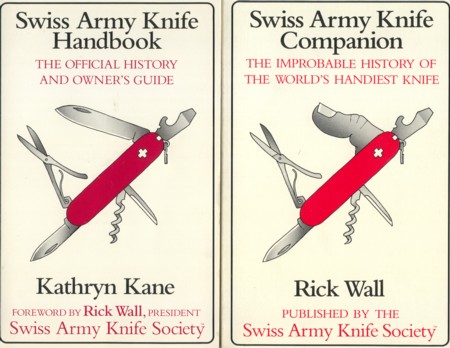 It has occurred to me after collecting Swiss Army Knives for years that I have had a few curiosities about the symbolism of their emblems and trademarks. I didn’t know much about the Swiss Cross found on the Swiss Flag or whether it had any religious significance, but I wondered about it. Secondly, I wondered as many others I found out later, what the meaning of an “umbrella” had with Swiss Army Knives. And, I also wondered why CH was the official abbreviation for Switzerland. So, when I did a bit of research I found out some very interesting facts.

Not what you expected eh? I posted this to encourage all you guys to do your own work. I'm just a coffee table hobbyist using basic hand tools.

Something I have been working on for awhile, I am not sure it will be successful. The pictures you see are a second attempt at a linerlock. The mechanism is roughly the same as a SAK Trailmaster.

Hollow Handle SAK - This is just a quick mockup made from Plexiglas that I had around. It is on a Spartan for now; the right side of the picture shows it alongside a Huntsman.

Read more: Down and Dirty Lightbox