UPDATE:  ALOX Lumberjack order form is now closed!
If you didn't order one, please contact Felinevet, although his stock will be limited.


+Bianco has done it again!  While the newness of the recent re-issue of the Yeoman model is still fresh in our heads and hand, Roger is hard at work collecting orders for a limited release of the exclusive ALOX Lumberjack!

Rather than go with another regular issue model this month I decided we should try something different.  So, I contacted Tim (Felinevet) and see what he suggested.  After rejecting a few different ideas (I wanted something really interesting this month), we decided on the 108mm Safari Series Solo and Solo Plus! 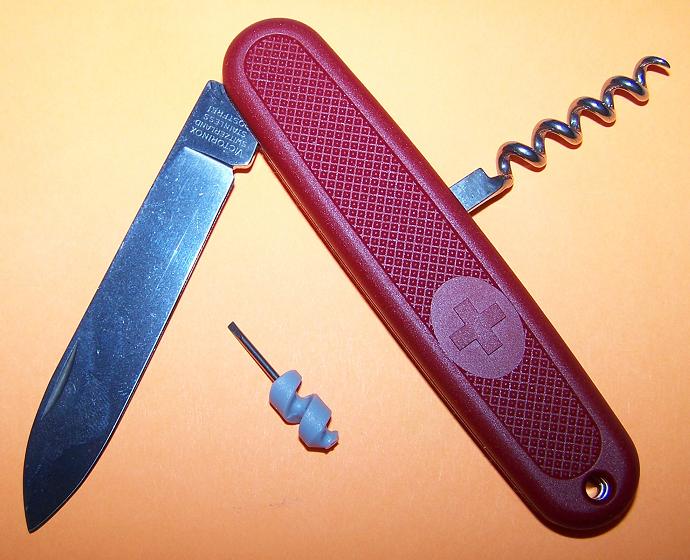 This is the first in a new segment dedicated to showing some of the interesting pieces in various member’s collections.  I am starting the ball rolling by including an interesting Wenger Commander from my collection, and I invite others to submit pictures and info on interesting knives in their collections for members to enjoy.

As if the original Great Yeoman Conspiracy wasn’t confusing enough, we now have a third version to add to the list, the 2007 SwissBianco Yeoman.

It was just a matter of time before SOSAK got our own HITman!

Battle of the Bottles

Battle of the Bottles...  and some considerations on a one-of-a-kind knife.

Within days, on February 17, my loyal OHT and I will be turning a year of excellent relationship, and I want to celebrate it by sharing some feelings with my friends of the SOSAK.

The author at work with his new best friend

Read more: Battle of the Bottles

SOSAK member NutSAK was gracious enough to offer these datasheets
regarding cellidor, aka the plastic like material used in SAK scales.

The Rescue Tool is perhaps the most innovative SAK to have come along in quite some time.  Victorinox, well known for their traditional designs really broke the mold and took most folks by surprise when this one came out.

One of the greatest complaints among SOSAK members is the partially serrated blade found on the One Handed Trekker and other OH series knives.  It is a recurring conversation topic in the forum and has resulted in several articles from serration removal to mods and has confused many others as the serrated potion of a combo edged knife is usually at the base of the blade rather than at the tip.  Others insist that while it is different, it is also quite useful, and many prefer the serrations at the tip to the base, or even to a plain edge.  However, almost everyone will agree that there should be a plain edge option.

Ladies and Gentlemen, your 2007 SOSAK Mods!