Recently the TSA started a BLOG to offer updates and recieve feedback from ordinary citizens, and I have to say, it's been quite interesting so far.  The responses have been all over the place, and there is even a section that would be of interest to the typical SOSAK member.  The section marked Lighters, Nail Clippers and Lithium Batteries discusses the current regulations for what is and isn't allowed on an aircraft.

This is an opportune time for members to have their say in a place where (supposedly at least) someone with the power and authority to make changes is paying attention- this isn't something that happens often these days, and I think it would be a waste of an opportunity if folks didn't take advantage of it.

The part that specifically appeals to SOSAK members, is the recurring topic of key chain sized knives like the Victorinox Classic, Wenger Esquire or other 58mm and 63mm models respectively.  With non locking blades under 2" they really do not pose a significant threat to passengers, but can cause disharmony from passengers who quite literally forgot they had them on their keys, or never in their wildest dreams considered it a weapon.  It also causes holdups as folks take the time to either leave the secure area to dispose of it somewhere else, distrust of the security people who are only trying to do their jobs (yes there are good and bad, but I like to think the majority are good, decent people doing a job handed to them on the dirty end of the stick) or simply by people having to take the time to haul the knife off their keys and surrender it.  The threat posed by a sub 2" blade is insignificant, especially compared to the sheer volume of negatives resulting from their banning. 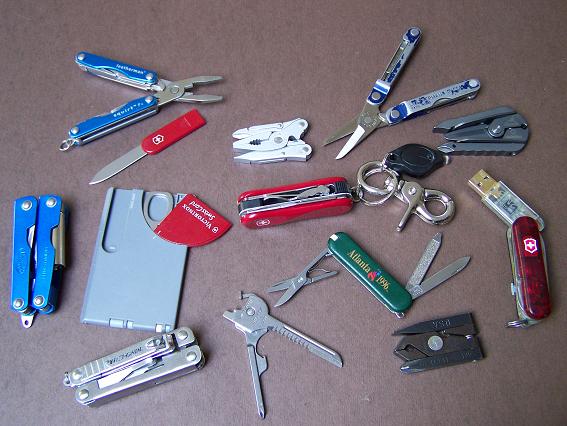 Do any of these really frighten you?


I'm not advocating the carry of full sized knives, fixed blades or partially serrated, armor piercing, military grade tactical fighting folders- I am simply suggesting that convenient models like Wenger's Swiss Clipper models, Victorinox' USB amd mp3 models, Leatherman's Micra, Swiss*Tech's Utilikey and other, simple key chain tools be overlooked, as they really aren't the dangerous weapons they are being made out to be, by an inconsistent, hastily written set of guidelines.

Regardless of your feelings on the matter, this is an opportunity to have your voice heard, and that isn't something that should be taken lightly.  For those of us who are not in the US, it is still important as we may not only fly in and out of the US, but also because most airlines in most countries have similar rules, and if one listens to the people, maybe more will.

Thank you for taking the time to look at this.