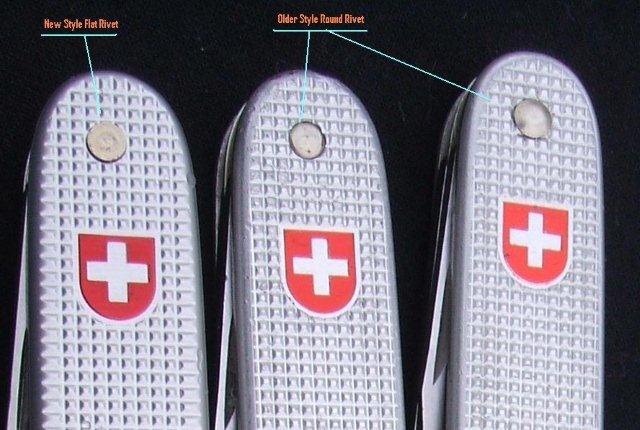 Variant 3
In 1977, the variant 3 was released to the Swiss Armed Forces. This knife has the newer aluminum scales that we are all familiar with. This red shield replaced the large flat Swiss cross that was on the older style scales.  The square for the control mark was moved to the other end, closer to the hollow rivet. This acceptance square is a lot smaller and required a different stamp. This stamp has the K+ was inside the W.

Variant 4
In 1988, The Swiss government sent a message to both Wenger and Victorinox. The square for the acceptance stamp was no longer required. After all the years of supplying knives for the Swiss Armed forces, the knives no longer required the arms control mark. The (WK) was removed. The first military knife contract was issued in 1891. The Swiss government had checked every knife that was sent to them, not one knife was ever returned to the factory due to a defect. I would call this a huge compliment. That has to say a lot about your manufacturing techniques. This change was great for the companies, but for us collectors, it is a great loss. Now how can you tell the difference between a military knife and a civilian knife?

Variant 5
In 1993, for manufacturing reasons, there were three small changes that were made.

1. A newer style of rivet was used. This flat style replaced the older, more domed rivets.  2. The second change was the replacement of the screwdriver and can opener. The newer tools are a little thinner. The older tools measured .91inch, compared to the newer tools that measure .87inch. The thinner material caused the weight to drop from 72 grams to 70.6 grams.

3. The newer style of screwdriver has the notch for the wire bending machined into it.

I would like to thank Urs Wyss from Victorinox for all his help. The information he sent me from Horst Brunner is making me look like I know everything. The real hero was Horst Brunner. His passing is a great loss to all of us.