After last month's video on scale replacement I got an email from PtiSuisse, who had some very different opinions than mine on how to attach new scales.  Since I'm far from being the Be All and End All of Swiss Army Knives, here's what he had to say.  Bear in mind it's adapted from a few emails, so if anything doesn't look right, blame the editor, not the writer!

For me, a proper knife, that is, a knife you can earn your bread with,
a knife that can save your life, should have a handle as solid as the blade.


Let's face it, those fancy cellidor scales are the weak spot,
they get damaged first time you do some mildly serious work,
and most of these multitools are shelf queens that we love to collect.

But for the serious shit, out come the real knives. Alox, or nylon scales.

Modding should only be done for two reasons :
improving on an existing design -mostly a complement of tools that has not been done before,
or for the heck, the fun of it -look at NKB's mods.

But even then, modding should only be done by people who know exactly what they are doing.
I have seen somewhere an article where a guy explains he has re-heated a phillips screwdriver
to soften it for drilling. IMHO, it is an heresy !

It's not completely my fault, I was born in an industrial district that was once one of the most powerful in Europe, and trained as an engineer.

With this kind of background, it is my opinion that the snap-fit assembly of the plastic scales on the brass bushings should have a bit of a suction cup effect to it, that is, the plastic should be under a certain amount of pull stress from the bushings
to assure a perfect fit between the lips of the scale and the liner.
If this is not realized, there is play, muck gets into it, and the plastic has enough play to warp.

Do this simple experiment as illustrated by this pic I just shot : 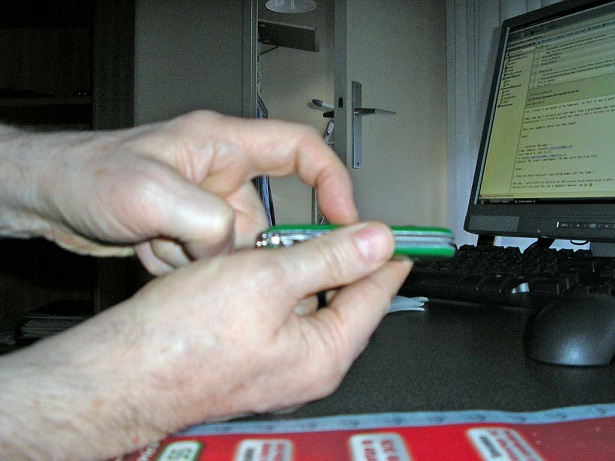 I try to avoid that by applying equal pressure with a vise when mounting new scales,
and on the 111 models (including my latest GAK), I add a bit of double-face tape between the scale and the liner where room allows.

I would like to elaborate on this paragraph I just wrote :

"With this kind of background, it is my opinion that the snap-fit assembly of the plastic scales on the brass bushings
should have a bit of a suction cup effect to it, that is, the plastic should be under a certain amount of pull stress from the bushings
to assure a perfect fit between the lips of the scale and the liner."

I think Victorinox is perfectly aware of that, as the pic illustrates : 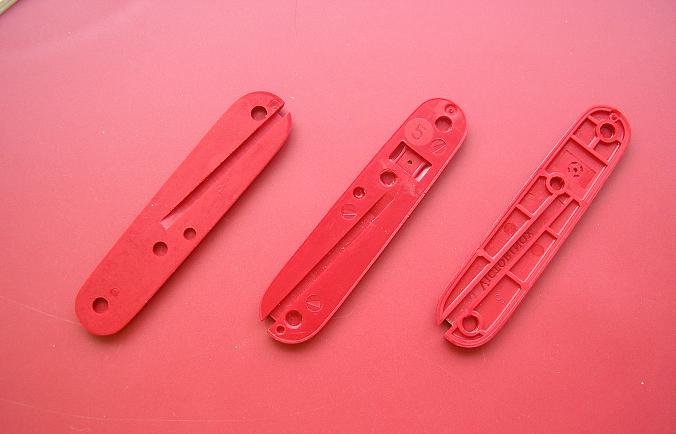 First generation cellidor scales, that is, just after the red fiber scales were phased out, were flat and solid. (left one on the pic)
They warped relatively quickly, just because the "hold" capacity of the three-point assembly is unsufficient vis-à-vis the surface.

So they switched to solid with a lip around the rim, precisely to obtain that suction cup effect I mention. (middle one on the pic)
these are the best there ever was, I am fortunate to have obtained a very small supply, I use them when I restore a knife for keeps.

After 911 when their business dropped 40%, they switched to the current hollow rip-off design, mostly under economic constraints IMHO,
same reason they thinned the tang on the main blade by .40 mm.

This is why I prefer solid cellidor or nylon.
Hope this was of interest.