My original plan was to compare the Bear Scout to a Wenger SI, but we ended up doing that last month (Case In Point II) with a Case Scout instead, due entirely to availability. I did not have a Bear Scout and there aren't a lot of retailers out there that deal with Bear and Sons.  So, when I had the chance to get a Case Scout I took it, planning to finally get the article I'd been wanting to do done. It's typical of my luck that I just happened to get a Bear Scout as soon as I've found a substitute!

So, the big question is, why Bear and Sons? Here's a little history lesson for you. When Tim Leatherman of Leatherman Tool Group made it big with the PST multitool, he not only created a new segment of the industry, he also defined everything that was wrong with multitools. One major problem that every other manufacturer that jumped on the multitool bandwagon decided to attack was the uncomfortable handles- on the PST and other older Leatherman models, the handles had exposed sheet metal edges that dug into your hands when using the pliers. 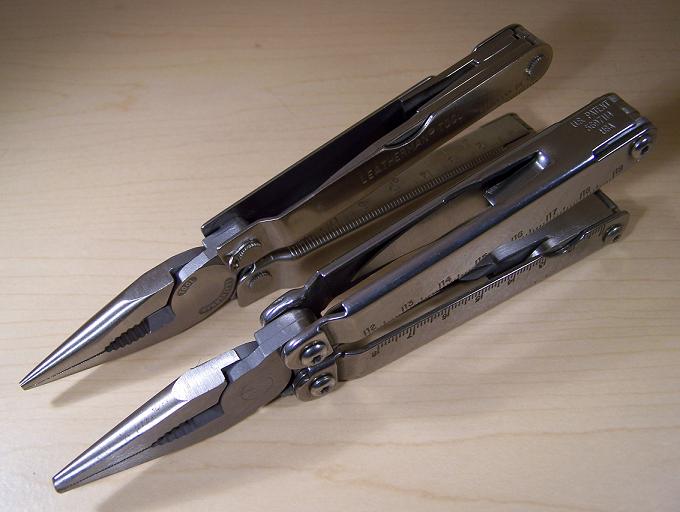 Many manufacturers tried a number of different options to combat this- Gerber developed a sliding head design, Buck developed sideways folding handles and Schrade simply put the handles on sideways.

Bear Cutlery MGC (as it as known back then) just turned the handles around so that the flat part of the handle as in contact with your hands when using the pliers, which gave the added benefit of being able to fold out the knife blade, screwdrivers, saws and so on without having to open the pliers. This design was then called the Bear Jaws and there were eventually several different variants. When Victorinox decided to enter the multitool market they had pretty well the same idea as Bear Cutlery, but since the Bear Jaws design was patented, Victorinox simply decided to buy them out to gain access to the patents and in 1997 the SwissTool was released. 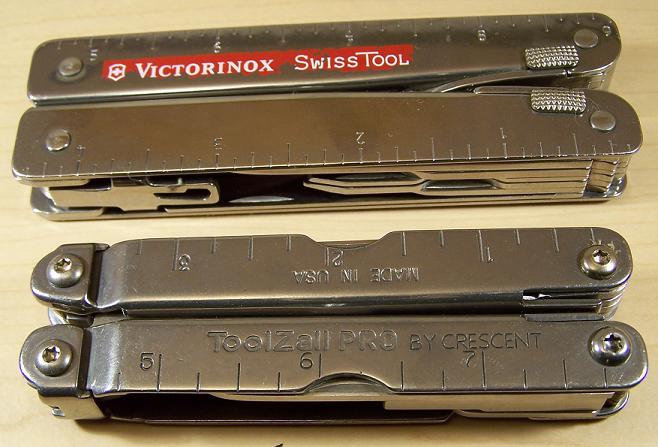 In 2003 however, Victorinox sold the Bear Company back to Ken Griffey, one of the original owners of Bear, after several years of running Bear as an in-house but separate entity. While Bear remained a US manufacturer with their on independent line, they enjoyed the full support of Victorinox, and even a few pages in the Victorinox Catalogues- see the 2003 US Dealer's Catalogue here. 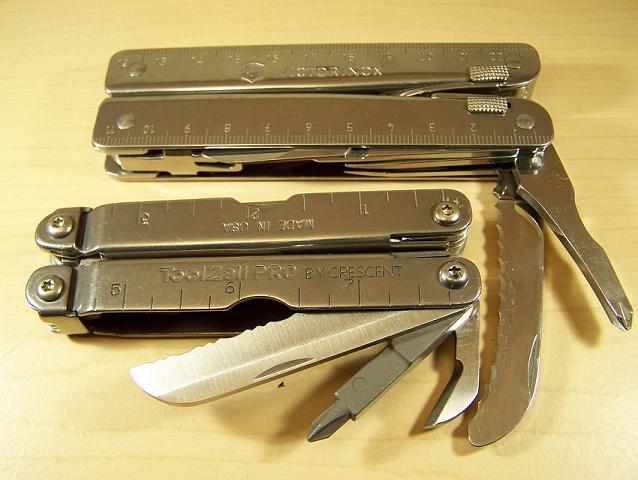 Upon regaining control of Bear, Ken Griffey renamed the company Bear and Sons and it is currently run as a family business.

All that aside, we can now look at the knife itself. It's a typical Scout pattern, with a main blade, can opener, bottle opener and awl, with bone handles, stainless steel bolsters and a bail. All the tools open smoothly and close with a snap- although in the case of the main blade, this isn't such a good thing.

In the center of the backspring is a hump that allows the spring to travel around the pin and continue along the length of the knife to work against the tool on the opposite side. As with many of the Scout style knives, this hump can contact the edge of the main blade, leaving a small chip in the edge. I don't personally see this as significant, especially since the bail is often in the way of the main blade when closing, and as a result, anyone with a knife like this is used to either using a blade with chips in it, or is capable of touching them up on a crock stick!

The only other real drawback to the Bear is the same one that I noticed on the Case Scout last month- the awl is just not up to the standard I like. In fact, the awl on the Bear Scout is more akin to a small eyeglass screwdriver, which is a function I can appreciate- if it's designed that way. The awl does still have an edge on it, and I'm going to offend some folks again by saying that it does indeed do a great job of causing sparks to leap off a fire steel, but I'd still like to see a point on it, as that's the part of the awl I use the most. 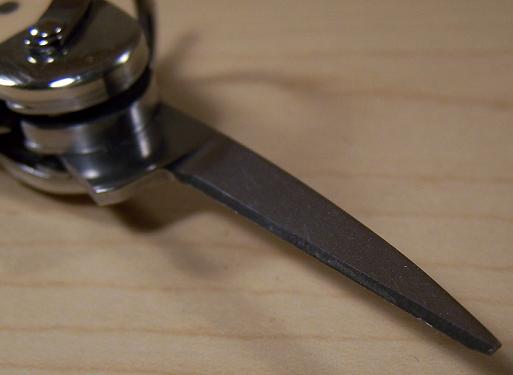 Much like last month's article, I am still inclined to recommend the Wenger SI or Victorinox Soldier (or Pioneer now that the Soldier is no more!) than a Scout knife, but that's based on a purely user basis only. Looks as they say are in the eye of the Beholder, and while I personally am an ALOX lover, even I can't deny the beauty of a traditional American slipjoint.

And, the best part is, you aren't really cheating on your SAK collection when you buy a Bear!