One of the, if not the most asked question in all of knife collecting is "how do I sharpen my knife?" or some variation on that theme.  As a result there are almost as many different sharpening doodads on the market today as there are knives.  I have run the gamut of many different types of clamp systems, crock sticks, stones and steels, and I will say they all have their merits.  While they all go about it in different ways, they are all just ways of maintaining a consistent angle when using an abrasive to grind away unwanted metal.

While I usually just use a dog bone type sharpener myself (or a butcher's steel for large blades like kitchen and outdoors knives) I have come across a couple of sharpeners of specific interest to SOSAK members!

Last year while visiting Freeport Knife Shop in Maine I happened to come across a small Victorinox sharpening gadget that contains both ceramic and carbide sharpening stones encased in an ultra safe, very user friendly frame.

The knurled side panels allow for a sturdy grip, which is important when working with sharp knives, and the top and bottom have grippy rubber feet so that whether you are using the carbide bits for serious work or just touching up the edge with the ceramic, the sharpener will be nice and secure.  All you have to do is slide the blade down each side a few times and you will have an nice sharp blade!

Wenger's offering is new for them, although not a new type of sharpener.  In fact, I have had a sharpener very similar to this one for years.  I got mine from Mountain Equipment Co Op last week- it was hanging in the aisle near the register and I just couldn't pass it up.  I also just got the latest MEC catalogue and it's listed with a giant NEW button next to it, so I assume it's new to them and not just something I hadn't seen before!

To try and learn more about this sharpener I contacted the VP of Marketing for Wenger's Canadian distributor, Swiss Peak, who told me this was not just a Canadian distribution item, but that it should also be available all across the board, available wherever Wengers are sold.  He also informs me that this sharpener was introduced last year through Rona, but since I haven't had a Rona store near me until very recently, I have never been in one and therefore missed out on this one until now.

This design of sharpener works opposite to the Victorinox model- rather than hold th sharpener still and move the blade through it, the blade sits edge up on a desk or counter, and you ride the carbide bits down the blade, starting at the base and moving towards the point.  One tip I have though is to not put much pressure on the blade (a good tip for sharpening on any system!) as pressure could damage the point of your knife as the carbide stones go over the edge.  Just add enough pressure until you feel a slight grinding sensation, and always better to do a few more licks at a lower pressure than to apply too much pressure even once.

Safety is also a big factor in this design, and there is a guard for your fingers just in case you should somehow slip.  Also, with the blade securely held on the table top the only thing that could slip is the sharpener, which is not as dangerous as a loose blade! 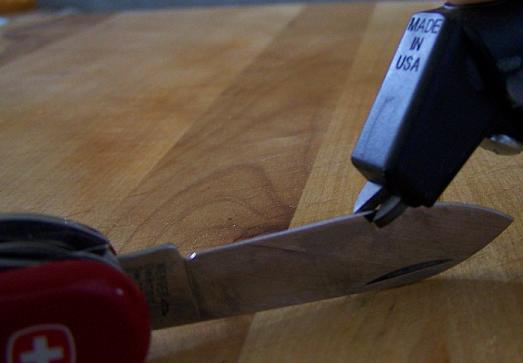 Either of these sharpeners would likely service the average user for a lifetime, and both are good quality items.  The Victorinox sharpener is made in China, and the Wenger version is made in the USA.  I couldn't choose one model over the other though as they each have their strengths- for example, the Victorinox offers both carbide and ceramics, while the Wenger is better suited to long blades like kitchen or outdoor knives.  For the price it's not the kind of thing that you will have to spend a lot of time worrying about- get both and be happy!