Some time ago I managed to obtain some Nite Ize S-Biners from Marc at EDCDepot, and I have to say, I was hooked- no pun intended!  While they are not SAKs, they are great SAK accessories (SAKcessories?) that I feel are well worth sharing!

The S-Biner is named because of it's simple "S" shape with a gate at each of the openings, making it like two carabiners in one.  I like this set up as with carabiners in the past I have dropped my keys while trying to unhook it from my belt, and dropping keys is contrary to why I am carrying things on a carabiner in the first place!

Initially I got four S-Biners from EDCDepot- the #4's, which is amusing because there are only three sizes!  I was only planning to get two, but then Marc asked me that dangerous question- did I want the black coated ones or the regular?  Needless to say I now had to double my order to get some of each!  At this point I suppose it's prudent for me to point out that these are NOT for climbing, and is only rated for 75 pounds, or 33kg.  If you forget, it's printed right on the side, which is really why I just happened to have that information handy to put here!

Since I got them a few months ago I pressed one of the black ones into service holding my keys since my trusty old SOSAKOnline carabiner was destroyed in an accident- don't ask, I don't want to talk about that!  The black S-Biner has been an excellent replacement though, and hasn't failed me yet.  My usual carry method is to clip the carabiner to a belt loop on my pants, then hang the keys inside my pocket.  A few times I have managed to bump the lower gate and "lose" my keys in my pocket, but then that's why I keep them in there.  It's also important to point out that this only happens when I'm at work and wearing my duty belt.  For those not familiar with an Uncle Mike's Tactical Pants Retention System, it's kind of bulky, so as long as you aren't wearing one you should be ok!

Of course I was so pleased with the #4's that I simply had to get the other sizes and play with them as well.  Unfortunately, the other sizes weren't in stock at EDCDepot, and before I managed to get an order off to Pock-Its.com (my other favorite Nite Ize dealer!) I found some at Mountain Equipment Co Op, my local hookup, so now I am the proud owner of several #2's and #3's as well, plus another interesting twist that I'll get to in a moment.

The interesting twist I mentioned is that the S-Biners also come in plastic which allows for various other colors to suit whatever you may want to use them on.  I grabbed a yellow #4 and #2 to match my bright yellow Jeep.  Unfortunately they aren't labeled with how much weight they are good for, but I'm going to guess that the plastic won't take the same weight as the steel- and again, they are marked NOT FOR CLIMBING and I suggest you believe them and don't test it for yourself! 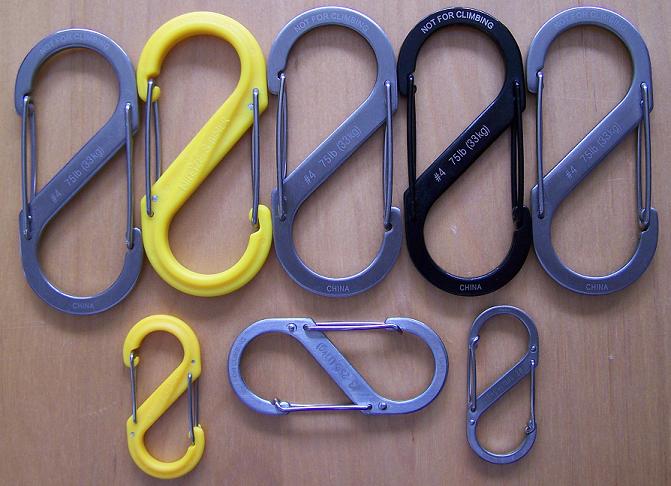 So, if you are interested in a handy clip to help keep your SAK (or anything else for that matter!) where you left it, you could do a lot worse than one of the various types of S-Biner!