Here is something a bit different. I am going to be comparing two special edition collector Swiss Army Knives. In this short comparison, I will be giving you plenty of photographs, and my personal observations and thoughts. I have yet to see any direct comparison on the net (I am sure it exists, I have just not yet found one), so this could be interesting to a few people.


Enough rambling, it is time for the review. Smiley

Instead of giving a short overview of the history of Victorinox and Wenger, a quick link to a wiki should do it. So if you are interested in a bit of background historical information then do please take a short visit to this link:

Today, we are going to take a look at the special commemorative and fairly limited offerings from both Victorinox and Wenger.

The Wenger is based upon an 1890 Victorinox model that was first produced by Wenger for the Army in 1901. To commemorate Wenger’s beginnings in 1893, there are only 1893 units of this heritage knife produced worldwide.

The knife comes in a beautiful green box with a metal Wenger symbol dead center of the sliding lid.

Once you take off the lid, you are presented with another wooden and green leather gift box. The outer shell has the front cut open for easy access to the inside presentation box.

The inside box is constructed like a soldiers box of the period. Apparently they had wooden boxes with lids that slid open and closed back in those days. I have not verified this, but I got that from some Wenger literature. I will take their word for it. Smiley

Inside, you will see the knife and a rolled certificate with some very small original reproduction drawings for the knife. There is also a matching square medallion with the serial number of the knife on it.

Here is a closer look at the rolled certificate with the blueprint drawing.

The knife itself is rather nice. It has a very beautiful wood/fiber handle. There is a serial number  acid etched on the bolster. My copy is #500 of 1893. The folding tools are typical of this period, with a knife blade, can opener, awl, and flat head screwdriver. There are no locking mechanisms on the knife, and is considered a slip joint.

Victorinox was the first to design and supply the Swiss Army Knife to the army. They did this back in 1891. To commemorate their 125th year, Victorinox came out with many Jubilee items such as a collection of common and popular Swiss Army Knives, watches, Chef knives, and even luggage and clothing. The crowning jewel I believe is this knife along with their limited edition watch that only around 250 were made. I don’t have the watch, but I am fortunate enough to have a copy of the knife.

The Victorinox is not as exclusive as the Wenger. The Victorinox Commemorative Soldier has a production of 1884 pieces x4 as they broke the world up into 4 regions. I know that North America is region IV as indicated by the knife I was able to get. I have #313 region 4.

The box is very eye catching. It comes in Victorinox traditional red with gold lettering with their 125th year motto “125 years your companion for life”.

Taking the top off, you are greeted with a similar presentation box as with the Wenger. Only this time, you have two leather straps with snaps instead of sliding the lid off, it opens much like a chest. The wooden box has the Victorinox logo imprinted with white contrasting paint.

Inside, we find a padded lid liner that hold the various papers somewhat securely, and the knife.

A closer look reveals that the paper work that comes with the knife is rather nice, and interesting. Very well done here. The paper is acid free linen type parchment. I can sort of tell from the feel. The folds are crisp and exact. Nothing is out of place.

The knife itself is very well constructed with typical Swiss quality. The fetching handles are of ebony, a very durable black coloured hard wood. The serial number is engraved on a metal plate where the awl is stored. To see it, you have to move the awl from its berth. Once again, we have the typical knife blade, can opener, awl, and flathead screwdriver.  Since Victorinox was the originator, you can consider the Wenger to be a copy of the Victorinox design.


Seeing that both of these knifes are limited collector edition replicas of the original Swiss Army Knife that was supplied to the Swiss Army, it is very easy to compare them both and note any differences in the knives themselves.

But let us first start with the presentation boxes.

Both knives come in very large presentation boxes that contain an outer shell and an inner shell. As you can see in the following photograph, the Victorinox is slightly larger in depth.

With the lids off. Both offer a very beautiful and quality inner presentation box. One opens via snaps, the other, with a  sliding lid.

Here is a side angled photo so illustrate the difference in presentation box dimensions.

Here, we have both inner presentation boxes opened.

Now onto the knives themselves.

The Victorinox has the black handle, and the Wenger has the red. Both are very nice quality knives. I did note a slight blade profile difference between the two. The Wenger is ever so slightly narrower blade depth then the Victorinox.

A look inside the knife.

And a look from the other side. 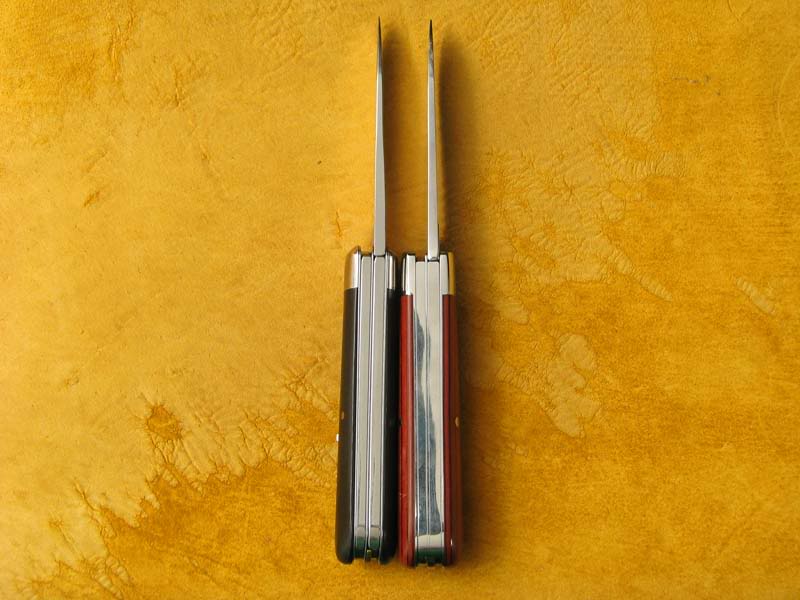 Well, both knives are very nice. Both exemplify the high quality and exacting manufacturing that made the Swiss Army Knife famous the world over. However, not all is super fantastic.  In all fairness, each knife is a work of art. However, if I have to make some direct comparisons, then there are some slight differences which interestingly mimic manufacturing tolerances and quality control in the rest of their respective product lines.

For instance, the Wenger has some very slight quality issues that would not be obvious unless I had both knifes to compare directly to each other. The metal pins that hold the knife together are not as well finished as the Victorinox. They tend to jut out past the handle a bit. Not terribly much, but its obvious it isn’t as silky smooth as that offered on the Victorinox. Likewise, the blade isn’t cut center as that of the Victorinox. If you look directly dead onto the blade with tip towards you and handle away, you will note that the Wenger is cut off to one side a bit. The Victorinox is dead center in this regard. This I don’t imagine will make any difference in the utility and function of the knife, and probably would never be noticed unless you take a magnifier to both to compare.

On the flip side, the Wenger has easier to fold out tools. The Victorinox does have a bit of stiffness that the Wenger does not have. This of course is only based upon one copy of each, and both have indicated that they have modified the blade folding geometry to make the folding tools easier to open as the originals can be a real bear to open. From the one example I have seen of a 1943 model, it was a real nail breaker. Both replica knives have improved on this quite a bit.

Another difference that needs to be mentioned is the different methods of serialization of the knifes employed by both companies. Wenger went for an acid etch on the bolster along with an identically serialized name plaque inside the inner display case. Victorinox decided to engrave the serial number where the awl rests. They also decided to give you a same serial certificate that resides in the lid behind a padded divider with a notch designed to show the serial number…a nice touch.

The boxes are similar in overall construction with some major differences. Each has an outer box with a lid that comes straight off. Each have an outer bottom with the front hinged for easy removal of the inner display box. The inner display box is vastly different. Victorinox went with a black wooden box with a velvet cloth glued underside for surface grip. Two leather straps with button closures. Inside, you have better paper work hiding behind an annoying padded divider. Annoying because there is no edge or secure method of keeping the divider from falling down when you open your display case.  This means you have to be careful in opening the box, as the paper work behind the divider wants to go every which way but stay put. Maybe they figure people aren’t going to open the display box much. I don’t know. The Wenger box is covered in beautiful traditional Wenger green leather. The wooden box has a sliding lid that is also covered in green leather. The paper work that is included appears to be an afterthought. For one thing, it is rolled tight. Meaning it fights you when you first open it to read. Secondly, it is a bit of a letdown as the blueprint is rather small and is below a many language congratulatory paragraph that takes up most of the precious real estate. No unique serial number is evident on the paperwork.

As mentioned before, the exclusivity has to go to the Wenger, there being only 1883 produced worldwide. The Victorinox model has a production of 7536 worldwide broken into 4 regions of 1884 units.

Pros:
-   Black handles are sharp.
-   Fit and finish is superb and flawless.
-   Knife is prominently serial numbered by the awl.
-   Nice presentation box and inner display case.
-   Paperwork is very well done and adds to the interesting history of the knife.

Cons:
-   Folding tools are harder to get out then on the Wenger.
-   Paper padded divider is a pain in the butt

Cons:
-   Wooden sliding lid can easily get jammed if slid off crookedly.
-   Fit and finish just a tad behind the Victorinox.
-   Paper work feels like an afterthought.

Well that concludes this review. I hope you enjoyed it as much as I did in making it. Till next time.