The old adage of “better late than never” has been proven by Victorinx on many occasions- the SwissTool was introduced about fifteen years after the original Leatherman PST, and yet is regarded by many as the only real contender to Leatherman's success in that market. One handed opening blades were also something that Victorinox eventually created, years after almost every other knife maker was doing, and the few models it is available on tend to be very popular- look at the number of One Handed Trekker variants in a recent article to see what I mean!

Once again, Victorinox is late to the party, but took their time to “get it right” with the new pocket clip, now finally available. SOSAK members will remember that I reported pocket clips being introduced at the 2009 SHOT Show in January, and I have just managed to get some samples to play with now.

According to the 2009 Victorinox New Products Guide, the clip is available on both the standard and OH Sentinel models. At this point there are no multi-bladed, clipped models available, but these three models (the OH is available in a plain or part serrated version) are a good start, and once it's been done, more are not likely to be far behind. 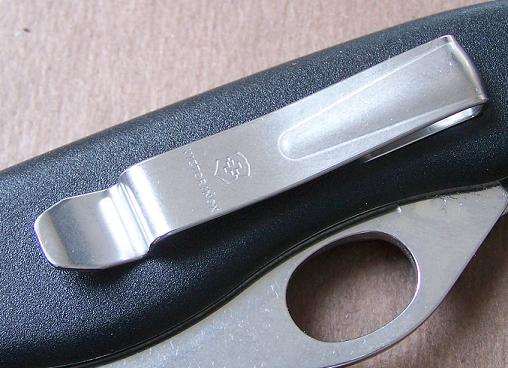 I haven't had the time to give them a real “acid test” yet, so a full review will have to wait until next month, but I can say I am happy with them so far, which is great praise from someone who has given up on single bladed tactical type folders. It looks like I may be revisiting the recent single blade shootout article soon, now that both Victorinox and Wenger are upping the ante with pocket clips!