Battle Of The Heavies

Sometimes, all that is needed is a small keychain multi-tool perfect for common light duty. However, sometimes, you require a bit more, well maybe a lot more. You might be in the market for a heavy hitter. Those tools that instill confidence, and would look right at home hanging off the belt of a tradesman.  Yes, we are going to take a short romp through a few of the big multi-tools out there.  Represented in this comparison are Leatherman, Victorinox, and SOG. Conspicuously absent is Gerber of which I don’t really have a large multi-tool to toss into the fray. I understand that the Diesel is their imposing model. If you are currently in the market for a large heavy duty MT, then you might want to include that model in your research.

The Victorinox WorkChamp XL weighs in at around 12oz, 340g.

It may seem strange to include such a large Swiss Army knife (SAK), but if you compare them, they are about the same size, and weight. It is considered a collector only piece, however, I can see this knife doing some heavy duty work when asked. Admittedly, the pliers are rather small compared to the competition. However, there are many functions that the WorkChamp XL has over the competition. The WorkChamp XL is a 111mm knife that contains every tool that Victorinox makes for their 111mm series.  The main blade is lockable with a side lock which is easy and convenient to use even with gloves on.  If you need something, chances are, the WorkChamp XL will support you in the field.

Pros:
-   Locking main blade.
-   Plenty of features.
-   Victorinox Quality.
Cons:
-   Big and heavy.
-   Awkward at times depending on which folding tool you are using.
-   Price.
-   No belt sheath included.
A do it all SAK that offers some possibilities that the others in this field can’t, with a few weaknesses thrown in for good measure.

This model has a neat feature. It includes an assist in one handle that powers two blades. Basically, it is a spring that takes over the opening of a blade once you manually open it past a certain point. In action, it works very well. There are two locks to prevent you accidently opening a blade when you don’t want to.  The whole package is rather slick. I had heard some minor complaints of SOG’s spring assembly taking too much room and the subsequent loss of space for more folding tools. However, this is mitigated by the inclusion of an extra folding tool in the other hand. On average, the PowerAssist is only less one/two folding tool(s) compared to the other SOG lineup. Not bad for a neat trick feature.  The blades do come out rather quickly.  If you get one, you may find yourself playing with this feature for a long time, and showing all your friends who will look puzzled at you for wanting a knife blade to instantaneously appear ready for use. I speak from experience here. On the worksite, SOGs are favorites because of a few neat features. The pliers have a gearing that applies about 3X the normal force. Also, the folding tools are easily removed and replaced.

Pros:
-   Geared Pliers.
-   Removable folding tools. You can buy your own and modify a SOG to meet your needs.
-   SOG quality.
-   Spring action knife blades.
-   Dual locks for safety.
Cons:
-   You do lose a folding tool or two to the spring assembly.
-   Folding tool cover is a pain to open and close. Needed to make the tool comfortable when using the pliers though.
-   Dual locks can be fiddly for those times when opening the blade one handed is required.
-   Tools are not built as tough and sturdy as some of the other competition.
-   Piano locks can be a bit fiddly when you first use them.
The PowerAssist is the right multi tool if you really like the assisted knife blades.  Of course, you also get the best plier action in the business, and SOG quality.

The SOG Powerlock model that I have here is made for bomb disposal and explosive experts. It has a well fuse spike that is rather large and takes up a few folding tools slots. It is rather imposing, and I suppose in defense, would make an excellent defense point for those times when you don’t want to kill your assailant. Not that is likely to happen. You can also show this off to your friends and family. You will get about the same puzzled looks from them as you would with the PowerAssist model.

Pros:
-   Geared Pliers.
-   Removable folding tools that allow you to clean/customize to your hearts content.
-   SOG Quality.
-   Plenty of folding tools for increased functionality.
Cons:
-   Folding tool covers are a pain to open and close. You can remove them much like the PowerAssist, but to do so means you will have a decrease in comfort when using the pliers.
-   Tools are not built as tough and sturdy as some of the other competition.
-   Piano locks can be a bit fiddly when you first use them.
The Powerlock is a good compromise between sturdiness and functionality. Because it does not have the spring assembly of the other model, you get increased number of tools. If you like the gear driven pliers, but don’t want or need the assisted blades, this is the model for you.
Leatherman Surge

The Leatherman Surge is built for work. Tough work.  It also has a fairly unique design compared to the rest of the field. It features on handed blade opening for the 4 major folding tools. Also featured is Leatherman ingenuity in removable tools and increased capability. The tool comes with a saw or a file, You can only use one at a time. Likewise, if you are not satisfied, you can go to the local handyman store and buy a saw to fit your needs. Likewise, you also get a removable bit adapter that fits Leatherman’s special flat shaped bits. If that weren’t enough, you also get a dainty dual head micro screwdriver.

Pros:
-   Big and heavy.
-   Lots of removable tools that mean you can customize the tool to your needs.
-   Plenty of one handed goodness to go around.
Cons:
-   A bit awkward to hold, as two opposite blades (one on each side) jut out in the closed position.
-   The tool rattles a bit when closed, or at least mine does.
-   Big and heavy.
The Leatherman Surge is an excellent versatile tool that is nicely designed. It is larger than the smaller charge and wave models, and also heavier. This is a very durable and dependable tool for heavy work. This is the perfect tool for someone who needs a rugged tough tool with an emphasis on one handed operation without the gee-whiz spring assisted SOG blade that may or may not stand up to dirt, grime, and abuse.

The Leatherman Super Tool is a discontinued tool. It was however, Leatherman’s first big multi-tool and I felt it was worth including. The Super Tool has a very good mix of folding tools, and its size does tell you that it is ready for those big jobs. Of note, the Super Tool was Leatherman’s first locking model. It incorporates a now outdated method of locking the tools that require you to move another tool 90 degrees to the locked tool to unlock it. Also, the Super Tool suffers from a bad case of clumping. Clumping occurs when you pull one tool, and most if not all of them come along for the ride.  There is also no one handed operations evident. With that said, the Super tools is still an excellent model with a good assortment of useful features.

The Leatherman Super Tool is still an excellent option that is showing its age. If you are looking for a solid dependable and well tested model, then you can’t go far wrong with the Super Tool.

The Leatherman Core is a successor to the Super tool 200, which is the successor to the Super Tool mentioned above. The Core is a larger and sturdier built tool with an equally impressive traditional assortment of folding tools much in the vein of the Super Tool Series. There are announcements that the Super Tool 300 will be arriving sometime later this year, so it may not be exactly appropriate to state that the Core is a successor. Irrespective, the Core follows the similar thinking that created the Super Tool series, but improved on the locking mechanism and a few other things.  For instance, this multi-tool does not suffer from clumping. The Core does not offer any removable tools like the Surge, but what it does offer is beefy and durable.

Pros:
-   Leatherman Quality.
-   Tough and durable.
-   Good set of functions.
-   Locking mechanism is easy to use and effective.
Cons:
-   Absence of removable tools curtails your options.
-   No one handed features.
The Leatherman Core is the tool for someone who enjoys the traditional Leatherman styling  in a tool that is pumped up on steroids for those big jobs. 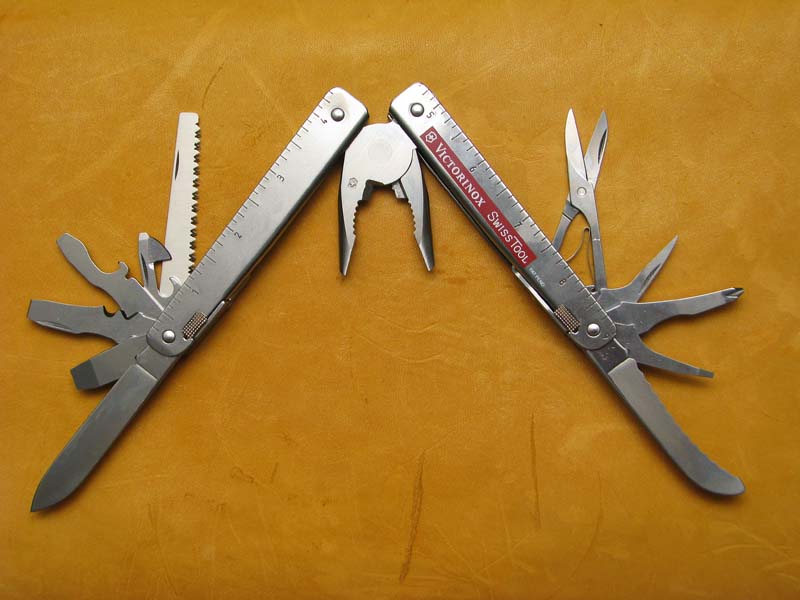 The Victorinox SwissTool RS is part of a few similar models that make up the Victorinox multi-tool heavyweights. The SwissTool RS features a belt cutter. There are a few other models that differ only in the tools that are included…and well…I guess excluded.  The belt cutter is a wonderful multipurpose blade…or so I am finding out. It can cut a lot more than just belts, and its serration helps in a variety of tasks that a plain edge isn’t suited for.  The SwissTool is a wonderful piece of precision and manufacturing. I love Leaterman, but the Swiss have them beat in the manufacturing department. Likewise, their tools tend to be multi functioned, squeezing every bit of real estate  function wise. Not everything is good however. I am not a big fan of their super polished and highly slippery finish. In fact, there is a mirror finish on everything, including the folding tools. It looks pretty, but sucks when it is time to hold it.

Pros:
-   Victorinox Quality.
-   Excellent features in a compact design.
-   I love the folding tool finger nail system for taking out a tool.
Cons:
-   Glossy finish on everything.
-   No one handed operations.
-   Wide pliers.
The Victorinox SwissTool illustrates the high quality and workmanship that only the Swiss can produce. However, with that said, the SwissTool does have its own issues. The High polish on this tool makes it a bit slippery to use in the field. More so with gloves on (I can attest to that as I have tried it),. The pliers are another thing. They tend to be very wide. Not a good thing for tight places. This is the perfect multi-tool for the person who is looking for a good solid quality piece.

Thus concludes this brief romp through a few heavy weights of the multi-tool world. All are capable of doing big jobs. They are also all unique in their own way. There is no such thing as the perfect tool, and when it comes time to search for a big heavy duty MT, you should weight your requirements and buy accordingly. These are all good tools, and I can’t recommend one over the other, as they all equally have their good and bad qualities.