Having lived with this SAK for a while now I thought I’d give you some of my thoughts on this much-overlooked little knife. The Ambassador comes from the Victorinox 74mm range and, though I've handled a couple before, it's the first one I've owned.

As you can see it has the exact same tool line-up as a Classic but in a larger frame. I should point out here that my supplier (thanks again Neil) specifically got me one with a split-ring, the vast majority seem not to have one. Ironically I don't have a Classic to do a side-by-side only a Bijou (essentially a Classic without a split-ring). Even given the size difference I still think the 74mm works well as a key-ring SAK so the inclusion of the ring was important to me. Although the extra size over the Classic means that it won’t get lost in your pocket amongst your change and whatnot if you decide to carry it loose.

One of the most important features on a SAK for me is the scissors and I always make sure I have some on me. I find they cause far less of a stir amongst the non-knife people and are capable of a lot of cutting jobs. Here is a quick shot of how the sizes from several SAKs compare (58, 74, 84 and 91mm). In truth the scissors aren't that much bigger than on a Classic. 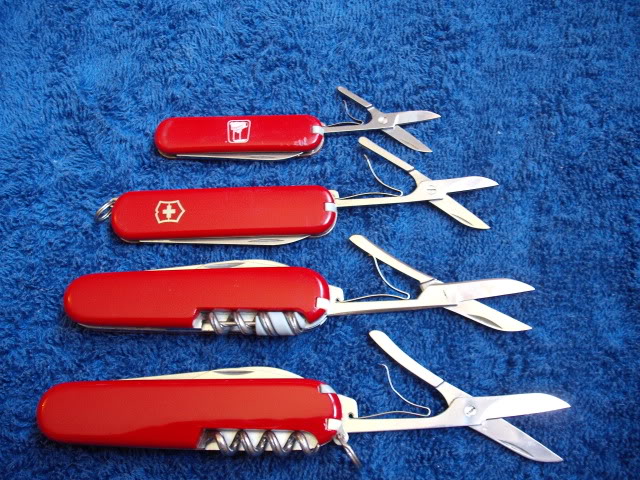 The nail file is fine but again doesn’t hold much advantage over that found on the Classic. Indeed it has the disadvantage of not having the small SD tip, which I find useful on the smaller SAKs. It should also be noted that the Ambassador doesn’t have the same file as the Executive, a much better tool so I am told.

For me the big advantage has to be in the main blade. The extra size makes it much more useful, plus the extra length in the handle makes the SAK much more controllable and give more confidence in use. I’ve never felt comfortable with the idea of a 58mm blade as my only carry, but this one feels much more like a full sized knife than I thought it would.

So all in all I’m very happy with this SAK. For me it holds no real disadvantage over the Classic but the main blade is a huge plus in my book. When I first got this I thought it would replace my Rambler as a supplemental SAK whilst carrying a ‘proper’ SAK in my other pocket. In truth, on more than one occasion, it’s been my only SAK and I’ve not felt under gunned. I’m not sure I can give it more praise than that.