As most of you know by now, I have a bit of an interest in the One Handed Trekker model from Victorinox. I swear it was an accident- I never went out of my way to collect OHT variants, it just seemed to happen that way. Well, at least until I noticed the trend... after that it became a bit of an obsession. So much so, I had an article printed about OHT variants in Tactical Knives some time back. Of course it was written several months before it saw print, and much has happened with the line since then, so I felt an update was in order.

As I said, there have been some changes to the OHT lineup since then, including some that were announced at the last two SHOT Shows. 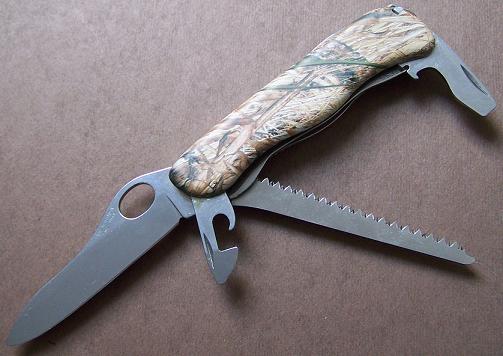 
For those not familiar with the 2003, 2007, 2008 and 2009 designations, here's a little recap. The 2003 models may not be from 2003, they are the original style, which ran from the introduction in 2003 to 2007 when there were some design changes, most notably the locks and the opening holes. The 2006 SOSAK KOTY was our Knife Of The Year in 2006, even though it was the 2003 style, which is why the label on it might look confusing. The new Soldier models are 2007 style, but because they carry their own year stamp, I refer to them by the year they are labeled as, not by style. For more information on the differences between the 2003 and 2007 versions, see the “New and Old OHT Comparison” article from December, 2007, and also the “New Soldier” article from February, 2009.

There are a few more variants available, including more plain edged versions, but this is where I m at right now- I'll add to the list as it grows, which I am very certain it will!