Readers out there who are familiar with the Discovery Channel show called MythBusters will appreciate this article. For those not familiar with the show, Adam and Jamie find urban myths to test using a variety of experiments and re-creations. Usually they also manage to work an explosion or some large scale destruction, but we are going to have to fall short of that as the SOSAKOnline budget is somewhat less than Discovery Channel's!

The myth we are going to look at is SAKs in the dishwasher, which is a question that comes up in the FAQ section here and on the forums. My personal belief is that at one time, Victorinox endorsed this procedure, but for the life of me I can't seem to find any documentation to substantiate that claim. Currently, Victorinox does not recommend putting SAKs in the dishwasher. However, this is something that I have been doing for years, and never had a problem with it.

Still, it's simply a matter of “my word against theirs” so I am going to put my SAKs where my mouth is, and test the theory that dishwashing will aversely affect Swiss Army Knives. The experiment is a pretty easy one- take a SAK and run it through the dishwasher, taking before and after pictures, but here on SAKBusters (!) we are going to go into greater detail. First off, what kind of SAK are we talking about? What era? There have been many different scale sizes and types over the years, then there's ALOX, Wenger.... so, to do it properly, it would be best to test a few different types of SAKs to see if any are affected differently, and, if there is any effect, it would be nice to know what temperature the dishwasher got to.

While some scales may be affected by the heat (I think it will be insignificant, although there may be a cumulative effect) I don't believe the heat will be nearly high enough to affect the the temper of the steel, so I think we'll be safe. To keep track of the temperature I'll place a chunk of aluminum plate into the dishwasher as well, and I'll take a couple of readings with my temperature probe a couple of times through the cycle.

Here are the contenders:

Representing 111mm SAKs is a Forester.

Representing new SAKs is a Compact.

Representing Translucent SAKs will be a Silvertech Spartan.

Wenger's entry will be Backpacker.

Then there's a Lumberjack for nylon scales.

Finally, a Classic to see if smaller scales heat up faster and perhaps warp more.

It's a 23 minute wash cycle, and for extra effect I have the dishwasher set to “sani-wash” which according to the manufacturer heats the water to 70C (158F), which should be significant enough to give results, if there are any results to be gotten.

After two wash cycles, the cellidor models lose hard- the Compact, Silvertech, and Classic, as well as the Backpacker all warped somewhat, while the nylon scales came out safe and sound. It is notable to say that the knives, liners, toothpicks, tweezers etc were all intact- even the pen in the Compact, which ordinarily I would remove before exposing it to extreme heat like this.

The Wenger and Classic also had an additional problem- the shields on both SAKs are ready to pop out of the scales since they are inlaid metal and the plastic around them is warped. I think that if the cycle had been any hotter or lasted any longer, they might have actually popped out.

Where is the myth that dishwashers damage SAKs? I'd have to say this myth is confirmed without a doubt. Seeing the shape of all the cellidor models after the wash I have to say that it is not healthy for them. While the nylon scales appeared to be intact, I'd say that repeated washings would likely have a cumulative effect, and while I have never had a problem with this in the past, I will certainly caution against it in the future. 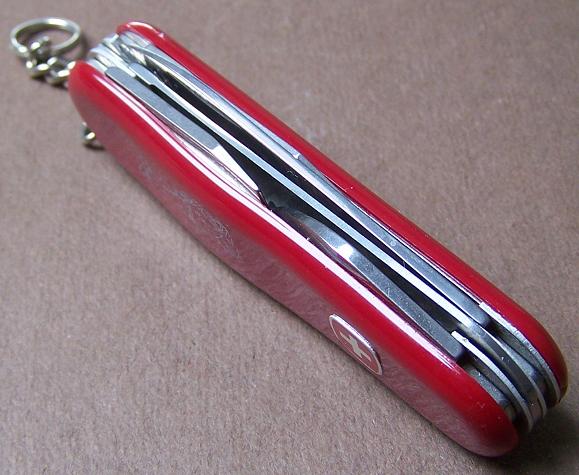 So, after all this time, I have egg on my face and say that you should not put a SAK in the dishwasher. Now if you'll excuse me, I have to place an order with Rotokid for some new scales!