One of the neat things I found on the recent trip to Maine was a nice 74mm green ALOX SAK, which I'll admit, I couldn't recall the name of.  I picked it up at Freeport Knife Company for song, despite it being  rare model that was still brand new in the box.  I love treasures like that!

Once I got it home I decided I needed to find the name for it, so I decided a quick call to Felinevet would help jog my memory.  Tim told me he'd seen a few of them in his time, usually promo models like mine, and that they were called Cavaliers.  That sounded about right, but I still wanted some confirmation, and using that as an excuse to show off a bit, I posted pictures in the SOSAK forum to see what the pros thought.  Well, that opened quite the can of worms!

As it turns out, like it's 58mm counterpart, this model is called the Escort.  The Cavalier adds a third, small blade, similar to the one found on the Executive model.  SOSAK member VASwiss, aka Karl was nice enough to send me some information on these and several related models.  These will be added to SAKWiki shortly, but for now, here is what we have:

Starting with the 58mm version, the Escort features a main blade and nail file, and is available both with and without the keyring.  I have seen it listed both ways under the Escort name in catalogues.  According to the US Dealer's catalogue, the 58mm Escort with keyring is model #0.6123 while the info I received from Karl lists the model without the keyring as 0.6300.  The 58mm Escort does not appear in US Dealer's catalogues after 2006, so it is presumably discontinued. 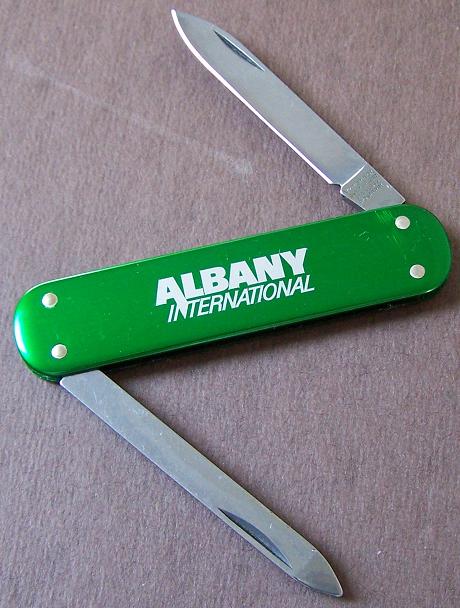 Moving back to the 74mm Escort, is available in both ALOX and cellidor models, the cellidor version being listed as the Escort II.  Both have a main blade and a full length nail file, similar to the one found on the Classic or Executive as opposed to the full length nail file found on the Prince and other 74mm models.  The cellidor version also features a toothpick and tweezers.  There is also a version with a keyring, but we had no information regarding the name or model number, if there is one.

The 74mm Cavalier adds the small blade from the Executive to the to bladed Escort, and also has a keyring.  It appears that the 74mm Cavalier was available in both cellidor and ALOX versions, and the cellidor also is rumored to have had the toothpick and tweezers.

The 58mm Cavalier is quite interesting as well.  According to SAKWiki, it has a blade, scissors, nail file, manicure tool, screwdriver, toothpick, tweezers and a keyring, obviously dressed in cellidor scales.

It's fascinating what you find when you manage to pick up a different model here and there!  I wen looking for info on one model, and found much info on four models that I'd previously overlooked... and all because a bit of shiny green scale caught my eye!  Keep them peeled as you never know when you might stumble upon a treasure that expands the world of SAK collecting for you!