Recently I got a request from Wenger, North America to provide some modded Wengers for the Outdoor Retailer Show in Salt Lake City.  I contacted several of our resident modders, and you have all seen the results in recent months- well, here's the lowdown on the show!

In the words of Wenger's Marketing Manager:

I was very impressed with the response to the mods. In fact, we had many customers ask us for catalogs and pricing for them. We had at least 6 people ask to place orders for them. Interest seemed to be evenly split amongst the 3 knives.

I would very much like to expand this for next year...hope you're interested in doing so as well.

The bad news is that I didn't get good pics of the display in which the knives were placed. If you remember, we back lit the products which makes them difficult to photograph. I should have taken more than I did. The ones I took were poor. Anyway, I attached a couple of pics of the booth and a PowerPoint presentation of the program which images of the knives and the signage we used. 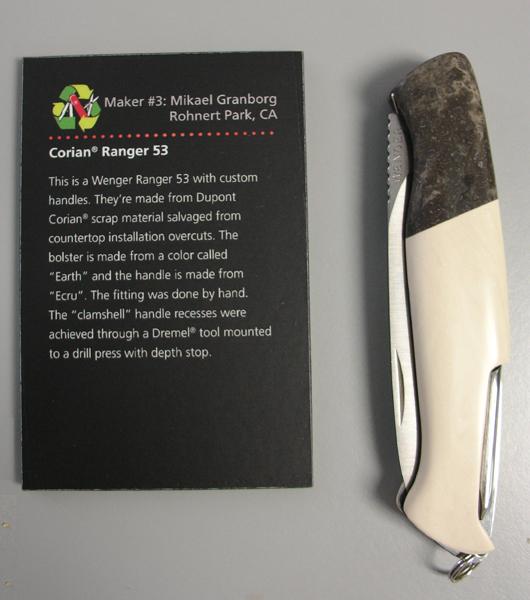 He's absolutely right on that- they used the same displays at the SHOT Show this year, and I have many silhouetted knives to show for it!  Still, it looks like our modders were a big hit, and I want to take a moment to tip my hat to the guys who participated!  Thanks guys, and start thinking about what we are going to do next year!