Ok 15 functions (I don't count the key ring) packed into a very 'bloated' Classic. This will not be a short review lol.

If you need loads of tools in a stubby, chubby package, this sak's for you!

Same form factor as the Classic (58mm), but over 3 times as thick. 3 LAYERS!!!
In height it is almost half as thick as a Swisschamp.

Comparisons to Wenger's Pocket Tool Chest (w/Microlight)
PTC is longer and wider significantly, but at only 2 layers, is about 3/4 the thickness of the Minichamp.

Comparison to Swiss Clippers
Again, longer and wider scales for the clippers.
The Swiss Clippers are only slightly thicker than the Minichamp, thanks in part to the Evo scales.

Looking at it, shield side up, key ring on bottom left corner, we have the following setup:

1st layer,left side - Scissors
1st layer right side - Cuticle pusher, underneath it is the ruler with the flat screwdriver (ala Classic SD's nail file driver)

3rd layer, left side - Pen blade (same as classic)
3rd layer, right side - Nail file with nail cleaner
Note: 3rd layer is half thickness of the other two layers, 1 half width implement on either side only

Cuticle pusher - Ok part of the wait for this review was due to the 'WTH' factor for this thing. I've looked online for tips,info etc... and I still don't get it. Makes a good stir stick but not for sugar (too short)

Ruler/Screwdriver - Ruler is nice for the fact that it does milimeters and 1/16 of an inch. Only problem with the ruler is the etching is very hard to see in bright light conditions. It's also very hard to feel the markings since they're not stamped like the fish scaler.
Screwdriver works as well as the Classic SD, good for some philips screws as well.
They still could have etched the nail file into the plain side, but oh well.

Picker Blade - Odd little thing, does not work with paper as well as I thought, it tears rather than slices (paper backs up in hook). Does very well in picking bad spots out of fruit. On thiner peelable fruits, the blade does slice into the fruit making a mess (tangerines). On thicker fruits, lemons, oranges, it peels rather well. Would be interesting to compare to the serrated peeler from the Executive.

Backup Blade/Pen Blade - While not a haeavy blade user myself, it's nice to have a backup. The backup resembles a bird's beak to me, and cuts well enough. It does lack a good tip to puncture as the pen blade has.

Bottle Opener/Philips/Wire stripper - Bottle opener works good, every bit as competent as the larger ones. Wire stripper, does anyone use this?
Philips - It's a small one, but very good for watch cases (battery replacement) and some eyeglass screws. I find most glasses have the flat, especially on the arms, so the Wenger PTC might be a better choice for some as the flat screwdriver will also do small philips. Even still I was pleasently surprised to find that the philips is magnetic.

Nailfile/cleaner - The file is as good as any other found on the Wengers or Vics, but the adition of the cleaner (not the SD) sells me over. While I've commented on the scratchiness of the cleaner on the metal saw (Vic), this one still is a bit scratchy and not as refined as the Wenger's (either 65 or 84 mm models). It's still MUCH better than the metal saw's version, but not quite perfect.

3mm Red LED light - Will light small hallways, stairs and door handles. The brightness is intense enough to shine through the solid red cellidor :) Switch is the Vic shield, which is a seperate piece, and has a very good tactile click when activated. Momentary only.

Retractable Ballpoint Pen - Switch is on the side and unless your hands are well calloused, you may find it to be a little rough to slide over. Nail file needs to be opened to make a rest for the entire package. When I first seen the pen, I figured the refill would be maybe 1/2 inch long. Pulling it out when extended it's over 2 inches, with a brass head on it. The pen writes VERY smooth (blue ballpoint,medium). If kept warm in a pocket, it'll write even smoother. The thickness of the MMC makes it easy to grip (for me anyways). I wonder if a 1layer signature would be awkward, slipping through the fingers and all.
It's also very easy to forget to retract the pen and pop it into a pocket, having it jab at you when you sit etc..

Protrusion of the LED is minor but may concern some. Being made of epoxy, I believe such concerns to be minor IMO. Likely it protrudes to allow more light to spill on a wider angle.
Oddly, the microlight on the Wenger PTC is recessed enough to be flush with the scale.

Battery cover will pop off when pushing the battery out. Be sure not to lose the battery cover when it goes flying, and it will. Also pushing cover back on will likely result in scratching the side of the scale up as well. Not a huge issue, but when your MMC is brand new, the first scratch (as with many things) hurts.

Key ring. You know you have too many tools packed when they interfere with the key ring.
Closing scissors may snap shut on it.
Key ring does not move freely when cap lifter is out, key ring tends to get jammed in. If it doesn't than it's in the way.

Main pen blade is the same shape as the nail file. Be careful not to confuse the two when your eyes aren't on the MMC.

Measurement inscriptions are not as easy to read as they are on the fish scaler. They appear to be laser etched and not stamped so you can't really feel them out either. The brighter the lighting, I find the harder to read the ruler.

Oh and don't forget to retract the pen before pocketing :) I'm currently very guilty of this. 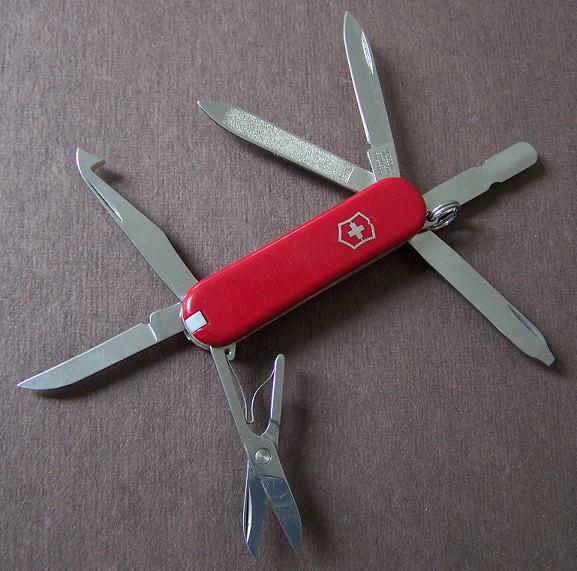 If the MMC is overkill, than thankfully there are other options, Wenger or Vic alike.
Also assuming you want more than the Classic/Esquire/Evo 81...