For some time now I have wanted to get one of the Pock-Its sheaths as a method of carrying a few of the doodads I often carry every day, and especially at work.  I don’t have enough stuff for some of the Maxpedition bags I’ve had, but I do have a little much to put in my pockets, and too much to put on my belt without looking like Batman!

Ordinarily I carry a small LED flashlight, SAK (duh!), multitool, Fisher Space pen, and the Bluetooth headset for my phone.  Of course, I also carry a cell phone, but it’s a Smartphone with a large, fragile touch screen, so it stays in it’s own pouch.

Enter the Pock-Its XL, sent to me from Bob Reichardt, the President of Pock-Its brand sheaths and the man in charge of Pockits.com.  This is pretty well the answer to all my needs, but there are different sheaths for anyone who carries different setups from what I do, so if the XL doesn’t seem like your thing, make sure you look at other offerings before moving on.

The XL is designed with a number of pockets (hence the name!) to hold a variety of items, coincidentally, the same types of items that I carry on a regular basis.  And, the XL carries even more than that, but I’m getting ahead of myself…

The main compartments of the XL are designed for a 2AA flashlight like a MiniMag (bit also fit’s the Victorinox 2AA lights, and others as you’ll see), a full sized multitool like a Leatherman SuperTool or Victorinox SwissTool, a couple of small loops for pens, penlights or other pen-like gizmos (tire gauge or laser pointer also comes to mind), and a nice elastic edged, expandable pocket on the bottom, suitable for all manner of things, like flash drives, small mp3 players, headphones, rubber gloves or just about anything else.  There’s also a small D-ring on the front for hanging keys or anything else you might want quick access to something- another good place to put a flash drive!  The D-ring also comes with a small molded plastic clip in case whatever you want to hang doesn’t already have a clip on it.  Very thoughtful!

It’s a well put together and well thought out design, but it still doesn’t end there.  On the backside is another pocket, similar to the elastic one on the front, but this one is designed with larger cargo in mind.  It actually runs the full depth of the sheath, although the way it’s done is ingenious- basically it’s got a cut in it about 2/3 of the way down, allowing not only flexibility, but also the option of wearing the sheath horizontally.  Still, it can accommodate larger items, like EMT shears, callipers or small fixed blades, but make sure you also put in the sheath!

While you can carry the sheath horizontally, it is primarily designed to be carried vertically, and the plastic belt clip is proof of that.  Oftentimes plastic clips are really just a cheap add on, and while I like to be able to slip a sheath on and off my belt on a whim, most clips really aren’t all that well designed.  This one is.  You see pictures online of folks bending this molded plastic clip, but much like Cold Steel videos you figure the manufacturers can do that and not worry about ruining them.  The XL’s clip can be flexed like that with no worries- it springs back safe and sound each and every time!

Ok, so it has a decent design, and is put together well- but the sixty four thousand dollar question is, how does it work?  Honestly?  I am impressed by it.  It seemed a little bulky the first time I wore it- in fact I only wore it from the house to the truck, and it got in the way a little with my seat’s lumbar support, so off it came (easily enough with the great clip!) and it went straight into the center console.  I pulled it out the next day and decided to give it another shot, and not just because it had all of my EDC items in it!  I must have done something wrong the day before, or had it in the wrong place, because this time it almost literally disappeared on my belt.  And, it was pretty fully loaded with a Gerber Infinity Ultra flashlight, SwissTool Spirit, Space pen, and a bike tool called the Topeak Mini 9 which I carry as it’s handy to have Allen wrenches handy.

I was amazed at how comfortable this sheath was, not just at work, but for every day use.  And, it’s not obtrusive either- I work with a lot of smart asses and I was surprised that no one has said anything about it.  My guess is, they haven’t even noticed it, or it didn’t stick out enough that they felt the need to take a shot at it! 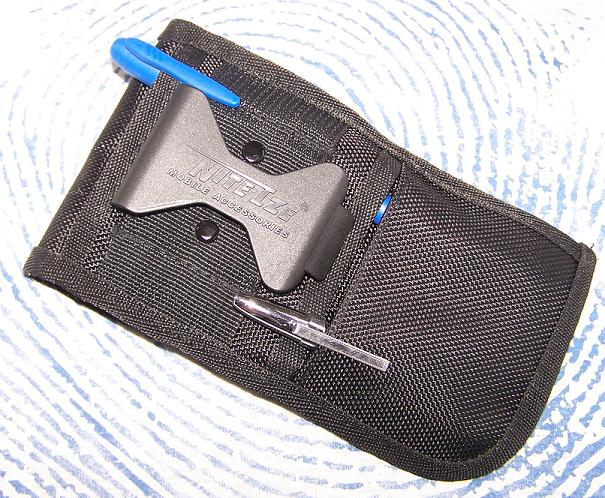 Lastly, although I’ve only had it a week now, I can see that it’s a pretty tough customer.  I may not have climbed the Matterhorn or rescued a dozen people from a burning building with it, but it has survived a week with a new puppy, who is curious and teething.  Despite her best attempts to chew holes in it (and me, and my wife, and my furniture… ) the sheath still looks brand new.

I can honestly say that I would feel comfortable recommending one of these pouches to just about anyone.  I am really impressed by the way this pouch is designed and made, and it is certainly worthy of carrying my precious Swiss Army Knives!