Originally I thought the black scaled Rescue Tool might not be the finest idea, but then I might just be pre-programmed by all the other brightly colored tools on the market, intended for first responders.  And, thanks to SwissBianco, I have one to test out!

One improvement you can see instantly over the original model is the sheath- no longer does one need to walk around with the huge red and yellow sheath that looks like it was stolen from Ronald McDonald.  It doesn’t end there though- they also have a more standard belt loop as well, rather than the oversized one meant for duty belts and firefighting gear.  This more standard loop and more subdued look mean that average folks will consider having this one handy, while they likely would have shied away from the old one.

As you can see, the black Rescue Tool also features the new hole- something current generation StayGlo scaled Rescue Tools will have as well, but I haven’t gotten a new StayGlo yet to compare it to, so we’ll have to suffer with comparing it to the older version!  For a list of the differences between the old and new models, see the OHT Comparison Article from a few months ago.

The Black Rescue Tool isn’t a huge favourite to me though- I may be somewhat biased though as most rescue oriented tools on the market are brightly colored and it may or may not really need to be high visibility to do what they need to do, but I know of at least one SOSAK member and first responder who still has his as a result of it being brightly colored.  If it had black scales, it would have been lost. 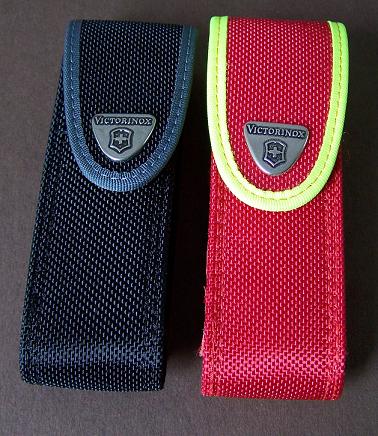 If you could get a yellow scaled model in a nice black sheath, I think this would be a winner.  Of course, there’s nothing to keep an enterprising individual like myself from swapping the sheaths, but that’s too easy if you ask me!  It does sit well with the rest of the OH SAK collection like my OHT’s and Wenger Rangers though!