I'm amazed at the level of interest in the new Soft Touch line. I'm also very happy to see several new models sporting this new finish. Have a look at the Wenger's european website to spot the Soft Touch applied to the Swiss Clippers!

Ok, first the big thing people are asking, how does the coating/finish hold up?

Well I've been using this guy since late July/07. As with any material, it's gotten knicked & scratched. If you look closely you can see little pits in the rubber where it has been nicked. There's no major flaw or blemish in the coating whatsoever. You might expect that a nick in the scale would cause the rubber to peel away, but that is not the case. It appears as durable as the cellidor which it covers. The logo feels velvetty soft and doesn't feel much different than the rest of the coating. If you thumb around that spot you can feel a very slight difference in texture, but it's hard to notice.

The only spot that I've worn down to the cellidor is under the toothpick slot in the side. This is from bumping the SAK against the branch that I was sawing. Again there is no sign of peeling or additional wear on the rubber, apart from the point of impact. And the affected area is very small, approximately 1 cm x 1 or 2 mm wide.

So far It's been wet, dropped in snow, frozen and bumped around to little effect. 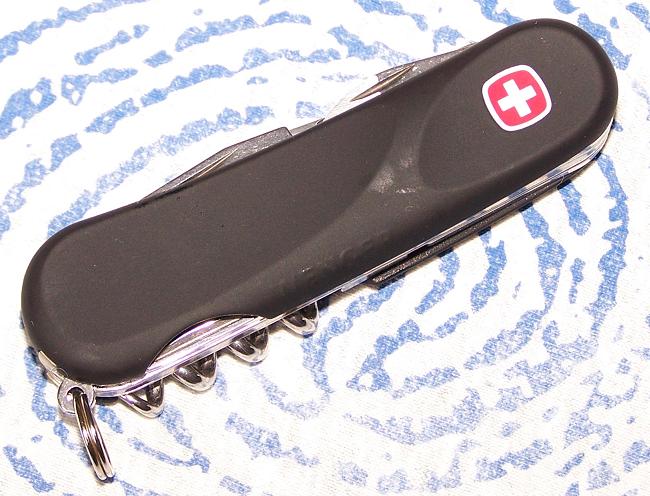 1) Ergonomics - Like any of the Evo's it seems gimicky, until you hold it. What I found impressive, was the Soft Touch isn't just soft, it's also very grippy. I've never handled the EvoGrips so I can't compare, but this a very comfortable SAK. I found while out in the middle of nowhere, in -20c windchill, even with gloves on, it was easy to handle.

2) One hand opening saw - I overlooked this in my original review. When I read about the little protruding nib for one hand opening, I realized this SAK had one too. Again, it doesn't seem all that special until you use it. In the cold, the one hand opening with gloves, was a hand saver.

What can I say, I highly recommend them!