As any SOSAK member can imagine, visiting the Victorinox booth was like going to Graceland for me!  It was an impressive booth, with numerous displays all presented tastefully and professionally, as befitting a company of Victorinox’ reputation and standing.  One could not help but admire the cleanliness and attention to detail that we all have come to expect from the knives they manufacture.

While I didn’t get to speak to any of the powers that be at Victorinox the way I did at the Wenger booth, I did manage to meet some very helpful representatives who were happy to show me the new products Victorinox will be releasing this year, and that is really the important part!  Unfortunately, as most of the knives they showed me were prototypes I was unable to photograph them at the booth.  Luckily, I just happen to have the same or very similar models already, so this article won’t be boring, especially if you are a fan of the OHT and other Victorinox OH openers!

The first interesting model will be the plain edged one handed Trekker model, the knife that most of us have come to know as the PE OHT.  Regular readers will recognize these as full production versions of last year’s limited SwissBianco run, many of which are currently in the hands of SOSAK members worldwide.  It appears as if the factory release will be in the standard black scales instead of the red or StayGlo scales that were featured on the SwissBianco releases.  It is still early though, and the possibility of additional colors still exists.

The next OHT variant that will be offered is a model in traditional Swiss camouflage scales, similar to the Swiss 90 camo model that I got from SwissBianco, only with the traditional red and white Victorinox shield rather than the “ARMEE” markings.

The third version to be released won’t actually be an OHT- it will be a one handed Solo model, with just the main blade and no other tools.  It will likely still have the toothpick, tweezers and keyring, but otherwise it’ll be the main blade and that’s it.  It should also be dressed in black scales but again, the possibility exists that it will be available in others as well.  OH Solos are also a fairly regular occurrence in SOSAK thanks to our in house modders- this OH Solo was made by Scibeer some time ago.

The last OH variant announced will be the black scaled Rescue Tool, but since this one will be featured in it’s own article this month I won’t go into it too deeply here.  In short, it’s the same as the existing OH Rescue Tool, only with black scales instead of the standard StayGlo, and it also comes in a regular black sheath instead of the red/yellow one that previous models were issued with.

Not all new products will be OH knives.  A new scale design will also be released soon on the Classic and Climber for sure, and possibly on other models as well.  The scales are more or less standard, at least in shape.  The new scales are clear plastic with a design applied to the inside rather than the outside, so the designs will be more durable.  There was only one overlapping steel plate type design shown at the show, but I’m certain Victorinox will be building on it with many other designs in the near future.  Unlike previous models with graphics, the art on these ones will not wear off, which is great.  I have to wonder though, how well the finish on the plastic itself will last, as we’ve all seen how dull standard, current generation translucent scales can get with even a small amount of carry.  The bright side is, the plastic can always be buffed to restore it’s luster, allowing you to restore any tarnished models. 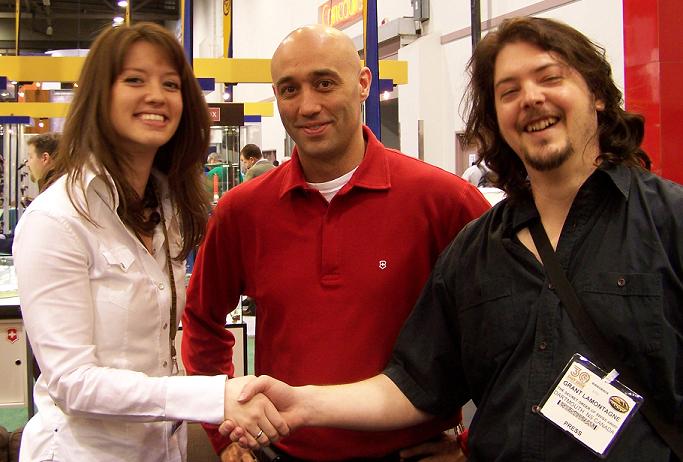 I would like to thank the folks at Victorinox that took the time to talk to us and show us the new products.  On behalf of all SOSAK members, I would like to say “Good Job” to MaryLynn, Renee and Jeff- you guys are the best.  And, thanks to MaryLynn, we’ll be taking an in-depth look at another facet of SAKs next month!