The Iron Grip of Wenger

Last month I said I would do an article on the PocketGrip from Wenger soon enough, but since then I’ve found a better story .  Just after I wrote that article, I managed to get another variant with some help from Tim at Felinevet- the Wenger IronGrip.  As you can see from the pictures, I went one step farther to make this a real collectible to be proud of!

The IronGrip is basically the same at the original PocketGrip except that it appears the scales have been  left off it.  The liners are actually brushed stainless with the Wenger logo etched into them, which made it perfect for an autograph from Peter Hug, current CEO of Wenger SA.

Unfortunately, I was unable to get it directly from Mr Hug at the show as it didn’t arrive in time, and so I left it with another Wenger representative, Dennis Piretra who took care of it for me and sent it on.  Last week I posted a SAKtivity in which I was opening a very special box from Orangeburg, and this was it, in case anyone was still wondering. 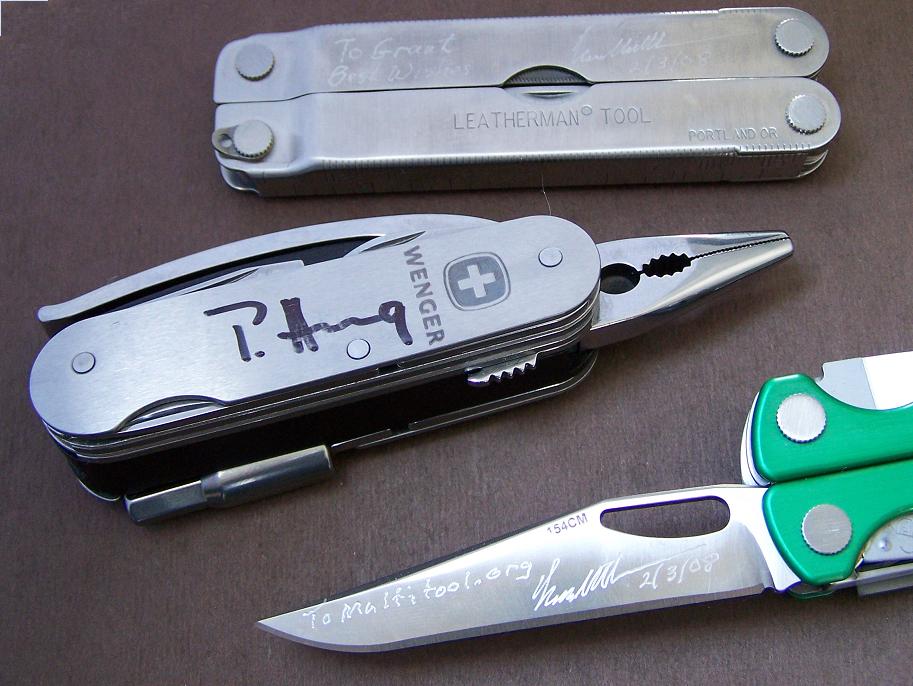 My collection of autographed tools- Wenger's Iron Grip and a Leatherman PST and Multitool.org Charge signed by Tim Leatherman
What better addition to a SAK collection could one make than a rare model with the actual signature of the company CEO on it?  I have to say that it is certainly one of the high points in my collection, which as many of you know, is high praise indeed!

Thanks Peter, Dennis and Tim for making this possible!