Travis Autry is a native North Carolinian, born and raised near Fayetteville.  His hometown, Autryville,  is smaller than the fictional "Mayberry" from The Andy Griffith Show.  He now resides in rural Johnston County near the town of Four Oaks with his wife, son, three dogs, two cats, several firearms and a multitude of knives.

His adventure in the world of blades began at age 4.  "I found a small pocket knife in between the seat and back in an old car my parents had.  I asked if I could have it and was told yes."  The knife was a two blade slip joint and he still has it.  Since that humble beginning, Travis has collected knives of all sorts.  At present, he is less of a collector than a user and accumulator.

His interest in Swiss Army Knives began while working with the Hoover Vacuum Cleaner Company.  "I found that having a knife with a foldling screwdriver in it was very useful for assembling vaccums.  Being able to quickly put one together got me more than one sale in those days."  Travis has since gone on to accumulate or collect a wide variety of styles.  Most are Victorinox, but there are a few Wenger pieces too. 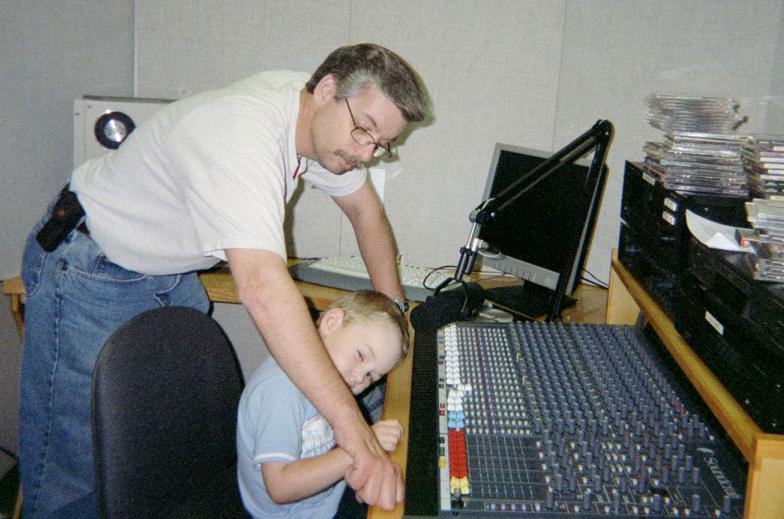 Travis and his two best friends (Ian and a SwissTool!) hard at work

As a natural outgrowth of using the tools on various SAKs, multitools held an appeal for Travis.  "My first multi was a Leatherman Super Tool.  It was alright, but when the SwissTool came along I thought it was just about perfect."  He still carries and uses that Original SwissTool.

Travis' daily EDC includes a SwissTool X, a Pioneer Rancher and a Rambler on the keyring.  "I may be nuts, but I never leave home without a SwissTool and at least one other SAK.  I use both frequently and like knowing that my tools are on me when I need them."