So far our SAKs Of The Month have leaned pretty heavily on the Victorinox side of the fence so we’ve decided to try something different this month.  This month, the SAK Of The Month will actually be two similarily equipped models from both Victorinox and Wenger- the Mechanic and the Journeyman.

These models have always been favorites of mine.  They are the smallest current issue models to include pliers and are very useful SAKs in their own right.  They are also “sleeper” models as they have largely gone un noticed by most and unsung by many who have them.  In fact, a modded version of the Mechanic, called the “Senior Mechanic” done by Scibeer and owned by SOSAK member Tim Colling gets more mention in an average week than the original does!

In addition to the pliers, the Mechanic and Journeyman both feature main blade/small blades, can and bottle openers, and phillips screwdrivers and reamers on the backside.  Of course, that’s where the similarities end as each company offers these models in their own style.

Even though most cars nowadays are not designed to be tinkered on by a guy with a Swiss Army Knife, pliers and screwdrivers never really go out of style.  At least, not as long as there are hose clamps, fuses, headlights and all manner of fasteners and small bits and pieces that need to be stuck together or pulled apart.

Of course, few folks venture under the hoods nowadays, but the small folding pliers found on the Mechanic and Journeyman are exceptionally well suited to the place that many tinkers spend a lot of time nowadays- inside a computer case.  The pliers are the perfect size for pulling jumpers, removing power cables or grabbing screws that inevitable fall in behind the motherboard, or other places that are inaccessible by fingers!  The phillips is great for mounting case screws while the large flathead is great for popping out motherboard batteries, prying old drives or hunks of metal out of drive bays, not to mention removing the plastic covers that are intent on hiding the new DVD drive you just bought.  And the pliers are also well suited to straightening a paper clip to get the disk out of the old drive too!

Then, when the day is over, the Mechanic and the Journeyman are there to open a can of beans and a beer for you.  What more could you ask from your trusty SAK? 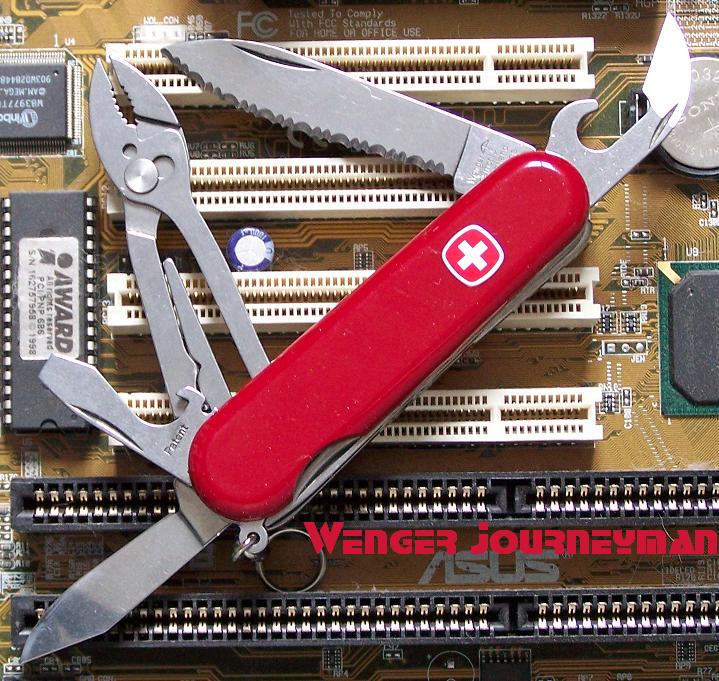