The SwissFlame and CampFlame are based on very popular models- the Camper (CampFlame) and Climber (SwissFlame) and differ only by the scissor/saw layer.  The XXLT of course is the "everything but the kitchen sink" model (or at least it was previous to the release of the XAVT!) and so had to include the lighter simply because it had everything else on it.

These models were discontinued due to a combination of poor sales (not imported to the lucrative North American market) and issues with the lighters.  As any lighter afficionado will tell you, jet flame type lighters aren't the most reliable at the best of time, are easily messed up by users, and this created numerous issues with Victorinox's lifetime warranty.

The lighter on my CampFlame works well, although i really only used it once or twice to make certain it worked, then drained it.  As a non smoker I don't have much need for a lighter, and if I did i doubt i would use a rare collectable like this one!

It's also worth mentioning that my CampFlame has Plus scales, and would make an excellent knife for a survival situation.  In addition to the wood saw and firemaking ability of this model, the lighter insert is also highly reflective, which could accomplish signalling duties in a pinch.

in short, the CampFlame is a very elegant Gentleman's type SAK that is well suited to an upscale cigar bar, or deep in the woods when you need a reliable and functional tool.  Now if they could make one with a Zippo type lighter insert then it would truly be an impressive SAK.

Meanwhile, this SAK sits tight in it's box, safe until the day I need to take it out and show it off again! 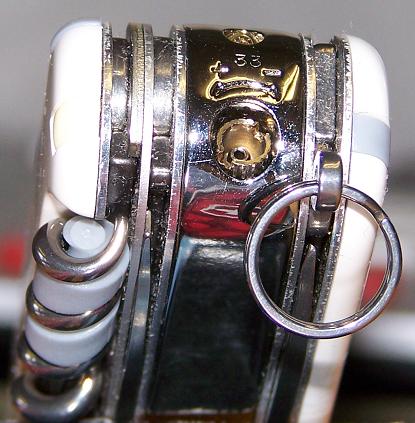