The mission wasn’t dangerous it was necessary.

Silently looking over the troops he knew that all were capable of this but he needed someone with special skills.

Someone he knew that he could count upon and from experience his decision was easy. Three recruits were selected.

The Farmer: for his sharp awl that could drill a hole thru concrete.
The OHT: for his blade that could cut anything, anytime, anywhere.
The Swiss Tool: for her long Phillips head and driving abilities.

As others were saddened by the fact that they weren’t called upon, they were happy because their friends and loved ones were.

Moved to a secret location they were briefed.

The mission: two heavy swinging door that never stayed open no matter what you propped in front of them.

The solution: a Stanley doorstop and not just any one, a bright brass finish, heavy duty one.

The plan: get in, get out, undetected.

The OHT quickly and cleanly separates the doorstop from the package (Yes, I could have ripped it out but where’s the fun.)

The Farmer was next; with very little effort he bored the holes for the screws.

Since we were ahead of schedule and undetected the Swiss Tool wanted a crack at drilling the holes but soon discovered how hard it was and settled for driving the screws instead.

Not wanting to be out done by the Swiss Tool the OHT wanted an opportunity to drive the screws (but never once offered to drill holes) He decided it was best left to the bigger Swiss Tool (besides he didn’t want to be known for doing a girl’s job.)

A couple minutes later the job was finished, the doors stayed open and we left without anyone knowing we were ever there.

Normally on SOSAK the SAK’s are rewarded with a beer or a bottle of wine but since we where in a vet’s office no booze was allowed so a dog biscuit was their reward. (As you can see there was a dispute over who gets the bigger one. I will let you draw your own conclusions to who won that battle.) 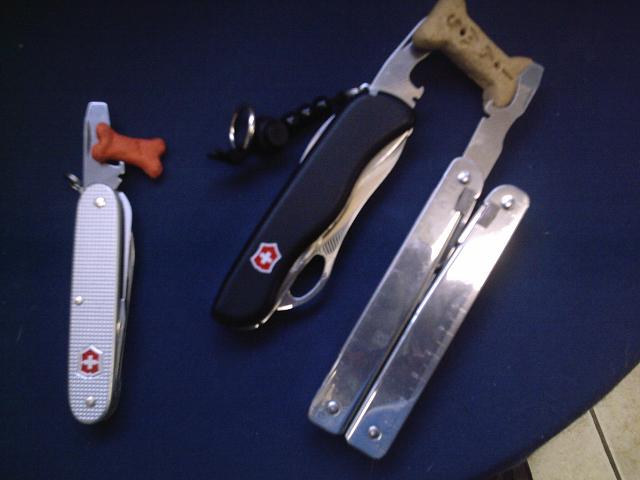 In all, looking back at that day I could have down the mission with only one recruit but where would have been the fun in that.