One of the most important features of a SAK is it’s ability to “do it all” in a small package.  This month’s knife is the living embodiment of SAKdom and something of a sleeper model.  It isn’t a flashy model, it isn’t a large model, and it’s even one the minimalists out there don’t talk about much- the Compact.

As a 91mm model the Compact is one of the most versatile SAKs available for it’s size.  Sure, you can get more tools in a Huntsman, but the Compact is about half the size, and has more than half of the functions.  The Compact features a startling array of functions in only two layers!  That’s right, in the first layer there is a main blade and combo tool, and scissors in the second layer.  While the scissors and the blade are pretty straightforward, the combo tool is not a simple tool. It incorporates a wire stripper, screwdriver, can opener and bottle opener.  That’s a lot of function, and it still doesn’t end there.  On the backside it also has a corkscrew (and there have been volumes written on the various functions of a corkscrew beyond opening Merlot!), the hook on modern (post ‘91) versions, and the tiny but invaluable mini screwdriver.

Some custom Compacts from the collection of Inkster
Of course that is pretty impressive so far, but the Compact comes standard with Plus scales, which adds to the versatility by including a pin and pen with the toothpick and tweezers.  Just using the functions for what they were designed for gives you 13 separate functions in two layers.  That’s one impressive little SAK!

Of course there is another version of the Compact that is also worth mentioning- the Timekeeper.  This model gives up the tweezers in one of the scales to include a Swiss made watch! 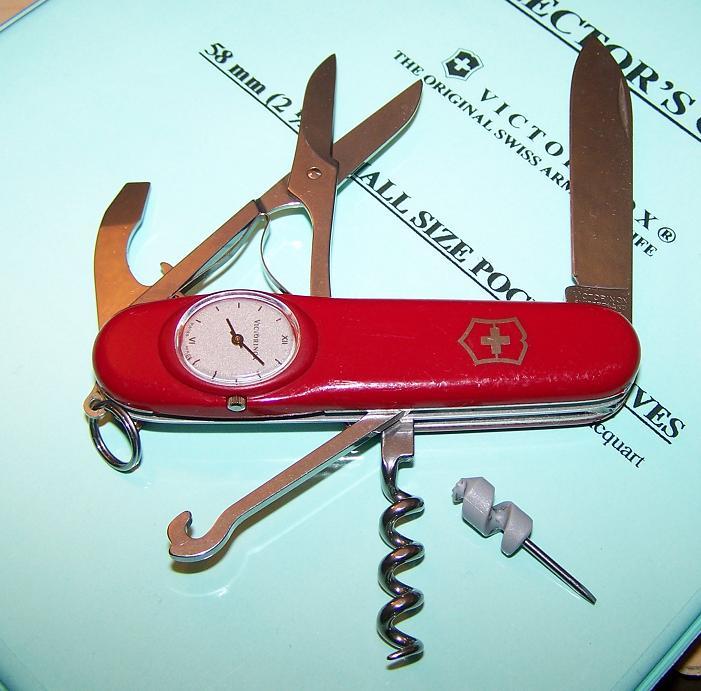 Both of these knives are a handy addition to an EDC or a collection (or both!) And are as non threatening as a SAK can be- perfect for slacks, office carry or even just for those folks who like to be handy without a lot of extra bulk.


For this month only, check out Felinevet's Shop for great SAK Of The Month pricing on these models!