If you're not real familiar with me, I'm not surprised.  I'm a relative new comer to SOSAKonline.  My name is Chris and I go by the handle of RedRamage on the KnifeForum boards.  I've been a member for a while, but only recently really started posting in the forums and actively reading the site.  However, I have been collecting for a while and I've built up a large collection including over 70 knifes and a few books.  I tend to specialize in the 58mm size.  I have a VERY large collection of 58mm including 28 different colors of classics and signatures.

Recently someone mentioned that they were looking at a brown translucent knife on eBay.  I was surprised because I didn't know that these were even available, and of course I needed to add it to my collection of 58mm if they existed.  Well, they not only existed, but I had one.  I must have picked it up somewhere in a used knife bundle or something... it was VERY worn and faded... frankly, I figured it was just a really faded purple or red translucent knife.

As you can see by the picture, it is not in good shape.  The luster was completely gone, and not knowing that Brown was a valid color, I just assumed it was a really faded different color.

Well, now that I knew I had a brown classic already, I needed to get it into presentable condition.  There was no way I was going to stick a knife that worn looking in to my display case.  Please don't get me wrong here... I actually do like the worn look.  A beatup, bruised knife means a loved and used knife.  My EDC Cybertool looks like a wreak, but that just means its loved.  But when it comes to me collection and the knives that I put in my display case, I like 'em to look shiny and new.
So, my next step was to acquire the the MicroMesh Modelers Kit.  This kit was talked about a few times in the forums and a number of people were raving about the results.  I figured I'd give it a try and see how it worked for me.  The kit contains a number of small pads with ever increasing levels of grit.  As I'm sure most of your know, "normal" sand paper comes in three levels: Course, listed at 60-grit; Medium, a 100-grit; and fine, a 150 grit.  Well, the MicroMesh stuff starts off where the sandpaper leaves off... Going all the way up to 12000-grit!

You start working with the lowest number that gets out the major scratches, and then moves upward.  I should note that while my Translucent Brown Classic was very, very worn, it had no major deep cuts in it.  I started with 3600 grit on the back.  And while this helped, I found that it didn't smooth it out all the way.  I ened up stepping down to the 2400, which I felt got rid of the damage.  I eventually worked my way all the way up to the 12000.  I also used the polish that was included with the kit, but felt that this didn't add significantly to the finish.  My experiment done, it was time to flip the knife over and document the steps as I went along.

First, we have the knife prior to any sanding.  It looks okay in the picture, put believe me, it was very dull.  You can see this by looking at the first picture and comparing it to the red knife.  A lot more luster in the red knife.

After discovering on the back that I needed to start with 2400, I started right away with it on the front.  I found that it didn't hurt to go over the shield logo.  In fact, the pads help polish that up a bit as well.  I had to be careful to get the edges as well as the face of the knife.  The 2400 smooth out the little scratches and helped give a uniform, but quite full feel to the knife all around.

After going over the knife with the 2400 fully, I moved up to 3200-grit.  This step, like most of the other remaining steps was very incremental.  I did see a little change, but nothing significant.  A little smooth, perhaps a little more shiny but nothing really major.  After the 3200 comes the 3600-grit.  The pads are flexible and spongy, which makes it easy to get all around the edges and curves of the knife.  Of course, the face is simple to do, but following around the sides would be much more difficult with a ridged sanding item.

After 3600 we step up to  the 4000.  As you can see in the pictures, the knife is starting to reflect a little more light.  I'm starting to notice the dullness disappearing a bit.  There's still a long ways to go, but I definitely feel like I'm making headway.

I should note that this doesn't take a real long time.  In fact, had I stop been stopping to snap pictures and document the process, I imagine I would've been able to polish up my little classic in less than an hour... both front and back.

After finishing with the 4000, we step up to the 6000... and then the 8000.  The knife was REALLY starting to look good now.  Very smooth, and with a nice shiny coat.  But the 12000 made it look fantastic!  The luster is just really outstanding.  Easily as shiny and as of the brand new translucent knifes in my collection.  Frankly, I've over joyed with the results.  As I mentioned above, I tried the polish on the back, but didn't notice a real difference, so I left the front without.  It really didn't need it.

Take a look at the picture on the right.  I didn't get the two picture perfectly lined up, it's pretty close.  The top is the finished knife, the bottom is the original.  Notice a difference? The final work on the really is really beautiful.

Now, one caveat.  Even though I'm EXTREMELY pleased with the results of this effort, it is far from perfect.  The biggest problem is that with a translucent knife, you can see through the scales.  In fact, I can see through far better than I could before!   And that's where the problem comes in.  See there is a lot of dust underneath the scales, and even some damage from the tweezers scraping in and out.  It isn't horrible, but it is noticeable.  I wouldn't be able to past this off as brand new to a carefully observer.  It's still fantastic for me... and it will definitely be added to my display case, but be warned that you will see internal problems with a used translucent knife.  I imagine a none translucent knife will obviously not share these problems. 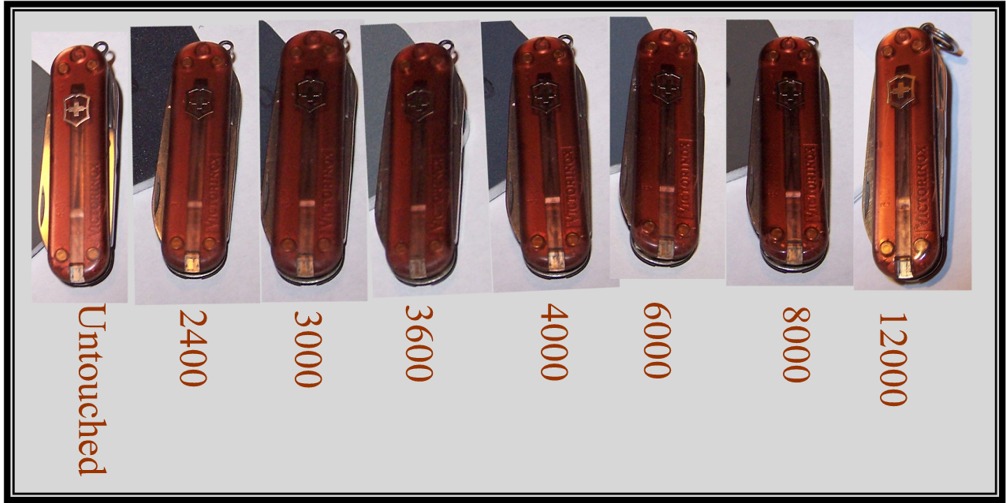 So all in all, I can not highly enough recommend the micromesh polishing kit.  It really did a fantastic job restoring the luster and beauty of my brown translucent knife.    The cost is well worth the price.  If you have any collection knifes that need to be polished, I would definitely recommend this kit.