Well I finally got the glitch sorted out properly, and I felt it was only appropriate to finally post the Ugly SAK Winner!
In case anyone missed the story when I posted it earlier, here is a reprint, along with the photo.  I'd like to once again congratulate BrandonNorCal on winning the Ugly SAK Contest!

Just wanted to email a picture of my ugly SAK.  I just became a member today while shopping for a new SAK and figured I'd share mine. It's 16 years old and I think it's a super tinker.  It is the first knife that I bought for myself when I realized that a man should probably always carry something like that.  I was probably 15 or 16 years old. It's not particularly ugly but as you can see the scissors and main blade are discolored from heat.When I was younger and didn't know anything about heat treatment of steel, I had several situations that required "surgery" and as part of surgical prep I heated up the tips of the blades hotter than hell with my Zippo to sterilize them leaving the blades permanently blued and probably technically ruined.  One other note is the wooden toothpick that I carved to replace the one that I lost shortly after buying the knife.  I carved it with the SaK and dipped it in some kind of urethane.  I can't imagine today how nasty that thing would be to put in my mouth but I was very proud of it at the time. You have a cool site and as a former collector of high end tactical knives I am proud to say I've returned to the SAK and look forward to getting a collection of them going as well as giving my son one as his first knife.Brandon"BrandonNorCal" 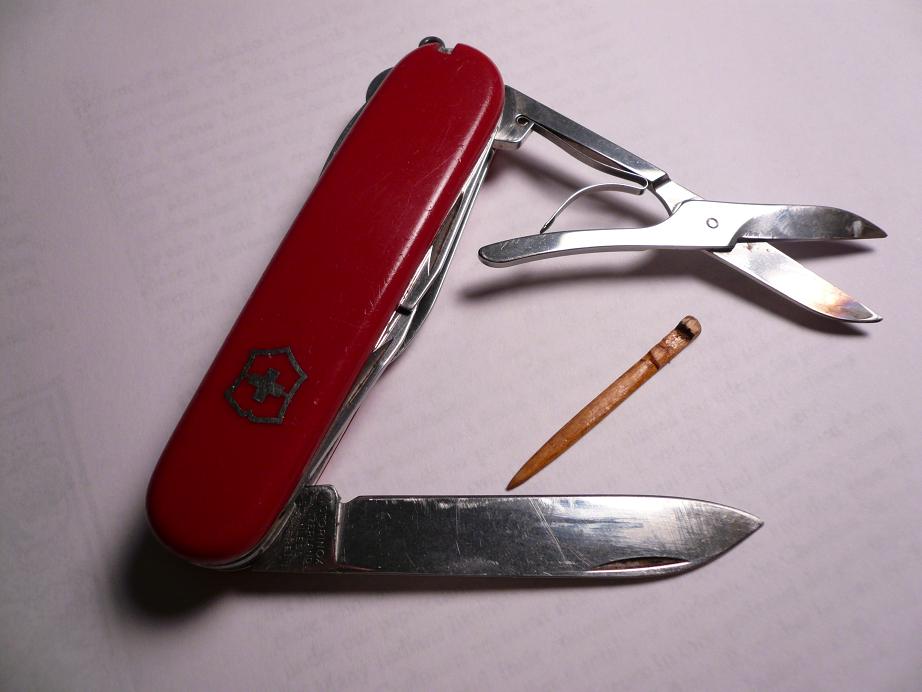