I thought about doing these models all at once, but the unique silliness of the Urban Chameleon models demands greater individual attention.

The first Urban Chameleon model I am going to show off has the fantastic title “The Alien from Uranus” which I am certain will have some members giggling.  I have been known to snicker a bit about the name myself, and wonder what possessed the Urban Chameleon crowd to give it that name.  My guess is that it lost (or gained, depending on how you look at it) something in the translation!

Some history on the Urban Chameleon models- They were a joint project between Victorinox and the Creative Factory gmbh (gmbh is the Swiss equivalent of Inc. or Ltd.) Which is a graphic arts/design company in Switzerland.

The series consisted of 28 knives, a chain and a plastic telephone cord type lanyard clip and were issued in a Spring/Summer catalogue in 1999.  An Autumn/Winter catalogue was mentioned in the Spring/Summer catalogue but I don’t believe it ever materialized.  Of course, given the rarity of this series it’s entirely possible that the second set was released and I never heard of it. 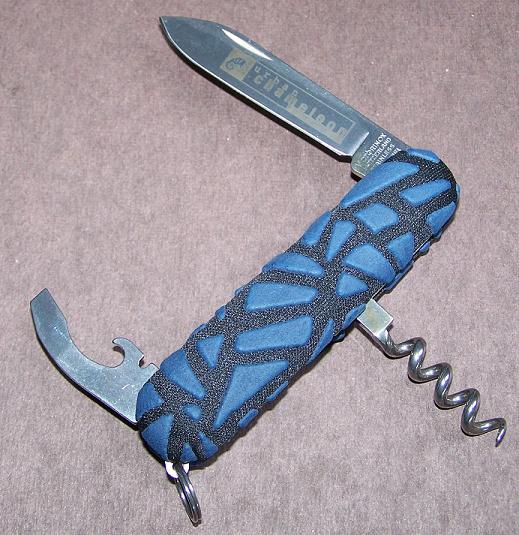 Getting back to the Alien from Uranus, this is a Waiter model with textured blue “scales” on a black base- sort of scales on the scales!  The model number, according to the Urban Chameleon catalogue is 991.1.030.1 and originally retailed at CHF 39.00.

As with all of the Urban Chameleon models, The Alien from Uranus never fails to get the attention of anyone who sees it.

I am missing approximately half the models in this series, and if anyone should have any information on acquiring the others, I would be greatly interested to hear it!  I will feature another model and more information on the series next month, so stay tuned!