How I got my first Swiss Army Knife

... and those that followed!

Along about March of 1991, I was employed as a product design engineer for a company in Winona, Minnesota.  One day a lady from the Human Resources Department approached me to say that I was in line for a ten year service award, and would I please choose a gift from the list she presented me with.  Little did I know at the time, that this casual visit was to be the beginning of a long term love affair with Swiss Army Knives.

The list she presented me with listed among its choices, a Victorinox Swiss Army model Climber knife.  I had heard a little about “SAK’s”, but although I was seldom without a knife of some sort within my easy reach, I had never owned a SAK.  Obviously this was an opportunity to be taken seriously, and so it was my choice without further question.

When the knife arrived, it was presented to me with all due ceremony, in a presentation case, with the company logo and three small rubies embedded in the handle.  This was obviously much more than I had expected, and certainly it was not going to become my “pocket buddy”.   It was placed instead for all to see, in a position of prominence in my wife’s china display cabinet.

Two of my fellow employees chose the same award and a few days after the awards ceremony, an early morning coffee meeting got around to a discussion about our newly acquired SAK’s, their names and fames, but the discussion was rather short-lived because none of us really knew very much about them.  The more I thought about it afterward, the more interested I became in finding out what I could about them, and I decided to search out as much as I could about their history and background.   It turned out to be one of the hills I had to climb, and little did I know then where the searching would lead me, but I was determined to find out all that I could.

The beginning of my search started  with hunting down a 1992 Swiss Army Brands, Inc. catalog.  Amazing to me, a real novice, it pictured and or listed almost a hundred different knife models, from the lowly Classic to the big daddy at that time, the SwissChamp.   With the catalog now in hand,  the question came to mind  - I wonder how difficult would it be to acquire a collection of one of each of the knives in the 1992 catalog!   If I were to find and purchase one each payday, it surely would not be a problem.  With this thought in mind my fate was sealed, and I joined the ranks of the SAK fanatics.  The hunt was on and I was on the way to where it all has lead me over the past ten years and more than twelve hundred knives.  Now, looking back over all of the knives in my collection, the original plan for building the collection slowly didn’t last very long.  I do have to admit though, that it has been a wonderful ride, complete with all of the hills and valleys that collectors experience, but it’s not over yet - there are still things I plan to do.

I think that my major accomplishment to date has been the formation of what has become a worldwide membership Victorinox Swiss Army Knife Collectors Society.  Currently it is listing more than one hundred seventy members.  This could not have happened without the continuing support and assistance of the Victorinox company in Switzerland, and the Victorinox Swiss Army, Inc., people in Connecticut, and countless other helping hands along the way.

This “club” project began early in the year 1999, with the thought that in all of my efforts to locate knives, I had failed to encounter any mention of any Swiss Army knife collector’s club.  One thing lead to another, and after a series of letters and phone calls, I was able to locate someone at then, Swiss Army Brands, Inc., to steer me in the right direction.  After more letters and phone calls and finally being able to apply for and receive permission to use the name and various trademarks, in October of 1999, it all became a reality and the first issue of the official club newsletter was mailed out.

Through the efforts taken in building the club, I’ve been able to meet either directly or indirectly, hundreds of other interested SAK owners.  Using the knives, the information gathered while locating them and  the contacts associated with them, I’ve been able to write articles published in other club newsletters, knife magazines, and most recently, to publish the first of three books written specifically for SAK collectors.  All along the way, I continue to have contact with many different people, both members and non-members, all of them sharing the same SAK interests. 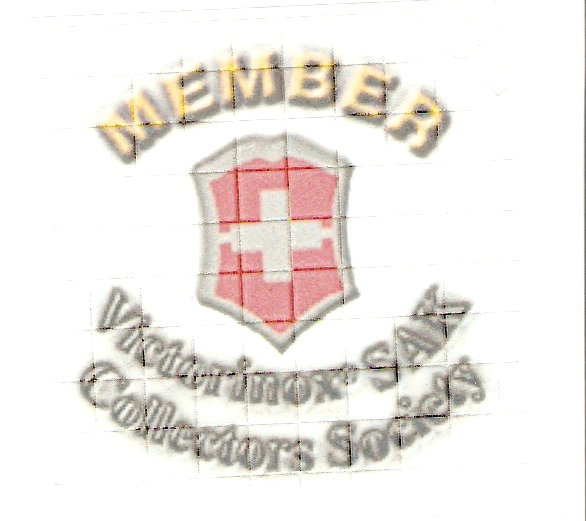 Club membership benefits currently include a Membership Certificate, Card and Button, a special Classic model Membership knife and subscription to a quarterly newsletter.  Members are afforded the opportunity to purchase current production knives at a discount through the club, and the newsletter provides a free classified ad section for the members to use for buying, selling and trading knives and accessories.  Presently, with Victorinox having purchased Wenger, their knives and accessories are now also available through club membership.   Also, annually, a limited  production special edition Club Knife is made available for purchase by club members.  As the club continues to grow, I intend to grow the benefits also, with the current effort being to establish a club website, complete with different links for access to SAK history, product information, boutiques, sale items, and all of the many  various areas of SAK interest.

Most recently, a contact made with an organization dedicated to developing exposure to the Swiss culture here in the United States, has offered us an opportunity to join their organization, presenting some very interesting possibilities to largely increase our exposure around the world.

Though the club name implies being a collector is required, fact, that is in fact not the case.  The common requirement for membership is that all of the members be interested in and respect the Victorinox or Wenger  product name, and be a  responsible knife owner, always recognizing its proper use and care.

We welcome new members, and hope to be able to serve them in any manner that we can, recognizing the motto of our club in the advancement of interest in Swiss Army Knives.