Anyone who has ever tried to compare similar models from Victorinox and Wenger knows that even comparable models don’t often match up all that well.  Sizes are off (standard sized Vics are 91mm while standard Wengers are 85mm, closer to the Victorinox 84mm range, in which there isn’t much of a selection), tool compliment can be close but is rarely exact (Wenger uses a nail file in many places that Victorinox uses a small blade), and of course with the introduction of Evolution and EVOGrip scales, the differences are even more pronounced.  So, naturally, I have another shootout in mind!

This time it’s the long anticipated OH Fireman and the Ranger 57 shootout that I eluded to in my original review of the Ranger 57 a few months ago.  At the time, I was Fireman-less, having traded away my OH Fireman shortly after I wrote that review.  Well, I have now got a(nother) brand spankin’ new Fireman, which is about as close as you can get to the Ranger 57.

Each knife features a one handed opening blade, a curved blade, wood saw, can opener, bottle opener, corkscrew and awl.  That’s pretty well where the similarity ends.   While they may both also have black scales, they couldn’t be any more different if the Fireman had StayGlo scales and the Ranger had psychedelic colors reminiscent of Jimi Hendrix’s guitar.  The Fireman has traditional flat textured nylon scales while the 57 is equipped with Wengers Evolution scales, which are a bonus and a drawback.  They are comfortable, but make the 57 much wider.  The extra length of the Ranger makes it seem a little less noticeable, but you still know it’s there.

As I have said before, I prefer the extra length of the 120mm Ranger series saw over that of the 111mm Victorinox version.  A saw is one of those tools where quality is great, but you just can’t beat extra length.  Both saws have excellent bite and a fantastic tooth pattern to make short work of wet or dry wood, which is old news to anyone who has carried a SAK with a saw for any length of time.

Since the OH blade comparison has been done to death (volumes have been written since the Rangers hit the market) I’ll just say that I like them both, and really don’t have much of a general preference.  They both do a good job. 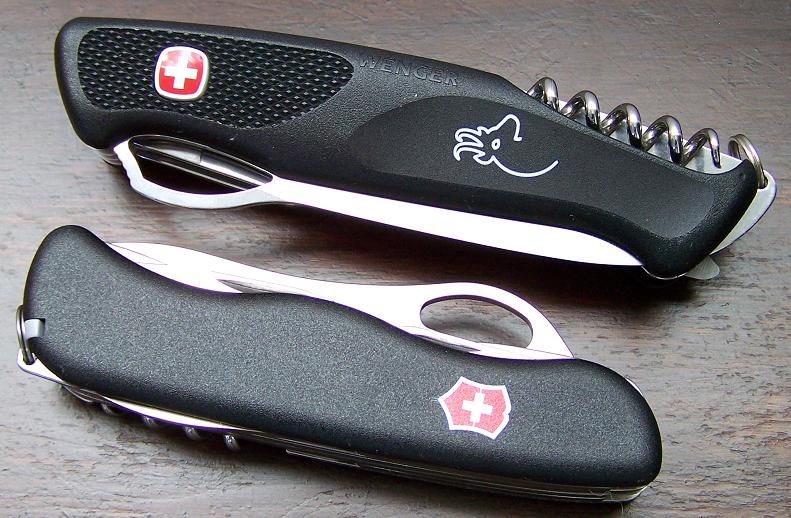 Perhaps, the most interesting thing to point out is that after carrying the Ranger 57 for some time, I have revamped my original complaint of the Fireman being too wide to comfortably carry and use.  At the time I was more familiar with the OHT which is thinner than the Fireman, but now I am more used to a wider knife (the Ranger) I am somewhat more comfortable with the Fireman.

So which one should you buy?   I can’t tell you that, but I can tell you that you certainly can’t go wrong with either, or better still, BOTH!