This article may offend some of the traditional slip joint enthusiasts who are also SOSAK members, but this has been nagging at me for some time.  Perhaps I just need more education and experience?

This will probably look like a “Why SAKs are better than traditional slip joints” type article, but that’s really not the intent- more just to try and understand what the fascination is.

A few months ago I got myself a Case Medium Congress with jade bone scales.  It has stainless steel blades, and is maybe not the best example of traditional slip joints, but it seemed to me to be a good place to start, and given the MSRP on the thing (around $75 US) it didn’t leave me with much wiggle room for others!

I gave it a good shot, trying to carry it for a couple of weeks, and to be honest, I still don’t get it.  I have never encountered more loose screws, import beers, fine bottles of wine, bolts, or crap between my teeth in my life- jobs that I would have easily had taken care of in seconds if I had a SAK.  Well ok, honestly I did carry a SAK half the time, but I tried real hard not to use it, honest I did!

Four blades just doesn’t make much sense to me.  I have asked this kind of thing in the past, and folks have pointed out to me that the craftsmanship, the design, the tradition involved etc, but to be honest, I don’t see it either, certainly not compared to the humble SAK. 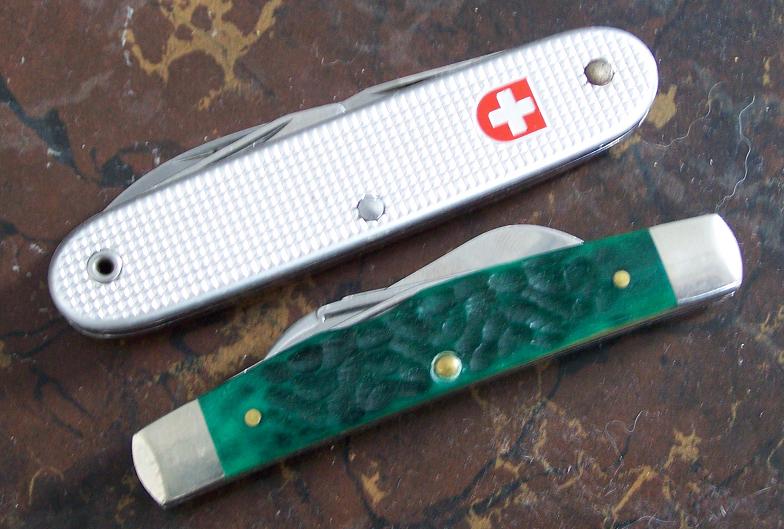 I could see that these types of knives would appeal to some, like someone who likes to whittle since the variety of blades would allow one to whittle longer, and would also minimize time spent resharpening, but I don’t whittle, and sharpening has never been a huge problem for me.

I’ve also been told that it’s the tradition involved- your father had one, your grandfather had one etc.  I can certainly see the point of upholding tradition, but it still can’t help thinking that my ancestors carried a pocketknife to be prepared, in which case, given the option, they probably also would have carried a SAK!