Every now and then someone will bring up the topic of the SwissBuck series of knives, and it’s always an interesting discussion.  Basically a group of about 15 knives, made by Wenger through most of the 90's, the SwissBucks were sold by Buck Knives in the US.  Swiss Quality mixed with American styling, and more importantly, a stronger US name and distribution network.

I always planned to get one of each model from the whole line, but the list of wants is always longer than the list of haves, or even the list of within reaches!  The one that jumps out at me most is the GlobeTrotter model, which is very similar to the Wenger Highlander, but with a few small differences.

The first thing one notices is the textured black scales and big red dot at one end that says Buck.  Unlike standard SAKs, the company logo is on both sides of the knife.  There is no Wenger logo anywhere to be seen on the knife.

Opening up the main blade you notice the other big change- the main blade is a clip point.  This comes as no surprise on the 120mm Ranger series Wengers (and the comparable SwissBucks in 120mm) but is quite surprising on an 85mm knife.  I believe this was done as the clip point is a traditional American styled blade made famous in legends of Jim Bowie and his famous knife, and because Buck’s knives were most famous for the clip blades.  The old Buck pocket knives were clip pointed, as are the fixed blades made famous in slasher movies.  In fact, next time you are in Blockbuster, take a stroll down the Horror section and see how many movie boxes have that familiar black handled, clip pointed Buck knife on them! 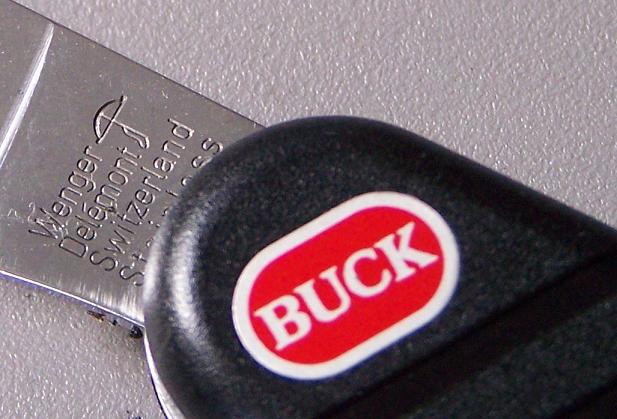 Back to business, the SwissBucks still have the Wenger stamp in the base of the main blade, and all of Wenger’s standard advancements like springless scissors and locking screwdrivers.  While it may say Buck on the outside, this is most definitely a Wenger knife, and you know what they say about  a rose by any other name, or no matter how you dress a cow.

While not particularly rare or expensive, many of the SwissBuck line were used, and used hard, so good examples may be difficult to find, but then, that’s half the fun of collecting them!