I remember seeing my first (old) GAK and not even knowing it was a GAK.
Let me explain.

Years ago I was stationed at a Nuclear Security site somewhere in Northern Germany
(location withheld for security reasons).

The guardhouse was divided into three parts. 1) The American section  (they were our missiles so we controlled access to them) 2) The German section which was our security force. And 3) a 30-foot concrete tower then was at the end of the building.

One afternoon I got a call from the tower, asking if we had any food. I told them “Yes, I would bring it to them.”

The trouble was the Sergeant of the guard was a real pain in the rear and didn’t allow food in the tower “because it would distract his soldiers”. Using some Yankee engineering  (that’s for you Def) I climbed up on our roof, crossed over to the tower and tossed a nylon rope up to them.

The theory was, they would lower the rope I would tie on the bag of goodies and when they were done we would repeat the process to dispose of the evidence.

Lowering the rope down it coiled and was about two foot short. Pulling it back up the guard opened the saw blade on his GAK and pinched the rope in it, problem solved.

While tying the bag on I quickly admired the knife before I dropped it in.

Later, the guard came down to thank me; I told him I was going to steal his knife. Taking it out of his pocket he handed it to me “You can have it, I have another.”

I was shocked and surprised by this action more so later when I realized that it was a Victorinox. I remember thinking how funny it was to have a Swiss made German Army Knife.

I carried the Camper at the time so I had to do a comparison between them.

All I remember was, the saw on the GAK cut more aggressively then the Camper (more like tore then cut) I didn’t like that.

Our duty sergeant (pain in our rear) pointed out a validate point “It’s for combat, not a finishing saw.”  Even though I couldn’t stand him, I had to agree.
Years past and I gave the GAK to a friend, which I have regretted it every since. Asking him if I could trade. He told me he didn’t know where it was. (talk about heartbreak).

Finding an Italian model in the local Army / Navy store I bought it.
May look the same but it’s not.

Found one on E Bay (Yes, I did check with Tim first) I got took, paid way too much and it wasn’t in the condition that was mentioned. I justified the cost by saying that my quest for a GAK was over.

Since then I have gotten a new version GAK (thanks Def and Tim) and another GAK.
I look at the two with pleasure, the other with distaste. 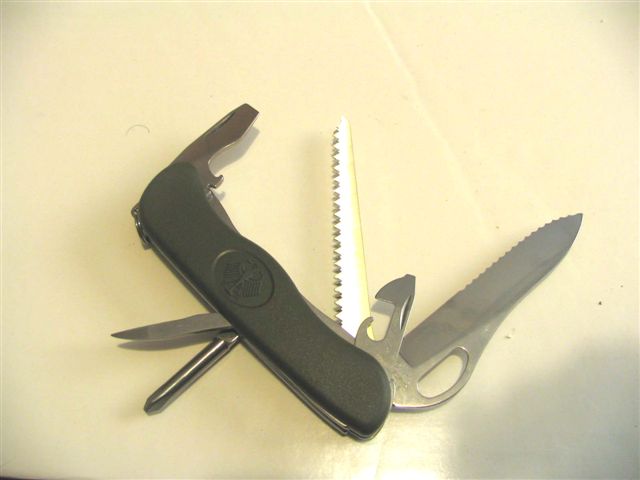 By the way if you would like to have the sellers name you can email me at This email address is being protected from spambots. You need JavaScript enabled to view it. I wrote them and they never offered to do anything.

What was your first GAK experience?

P.S. Special thanks to Spork60 whom I shamefully stole a picture from.